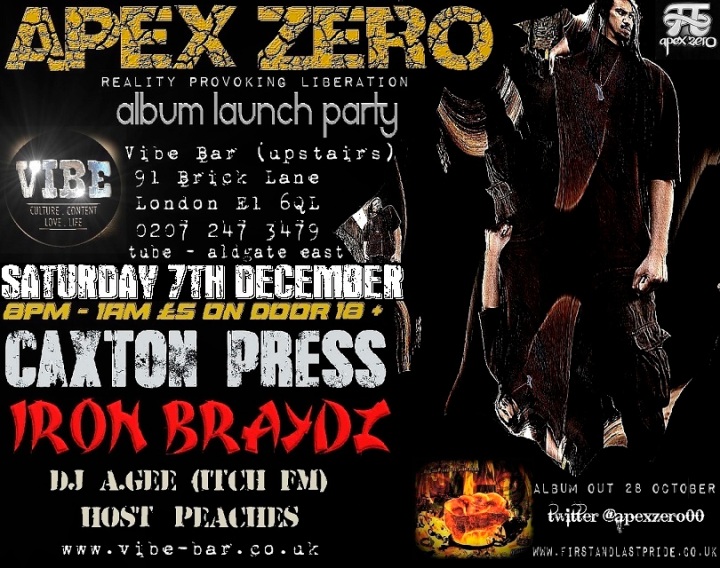 Apex Zero celebrates the release of his debut solo album “Reality Provoking Liberation” with his launch party upstairs at The Vibe Bar on Saturday 7th December 2013.

Live performances are a specialty for the young rapper & producer, having been a regular at the city’s renowned End of the Weak and Speaker’s Corner events as part of the duo First and Last, and also gained a following for the high energy shows put on as part of the group The Pantheonz of Zenn – La.

Apex plans appearing with a live band to perform tracks off the new album which releases on 28th October. Also performing on the night will be Caxton Press & the latest member of Triple Darkness, Iron Braydz. Spinnin the vinyl will be Itch FM’s DJ A.Gee and the event will be hosted by Peaches. The event has been put together by local live promoter Hoochinoo. This event has of course been re-scheduled from the original date of 2nd November.

There will also be freestyle open mic sessions in what’s shaping up to be a great night of hip hop with some of the hottest talent in the city, definitely not one to be missed!

Nearest tube is Aldgate East and you can get specific details from the venue’s site www.vibe-bar.co.uk and there is also a Facebook page HERE

Also look out for Apex Zero on some London radio stations soon, starting with Itch FM on Saturday 26th October from 8.30pm with DJ Sammy Jay, and on Bang FM on Tuesday 29th October from 10pm with Mr 13. There has been a fantastic media response to the album to date, and you will see much more coming in the weeks ahead.

You can follow Apex Zero on twitter @ApexZero00 and check out his official site which also carries links to his various other online platforms at www.firstandlastpride.co.uk