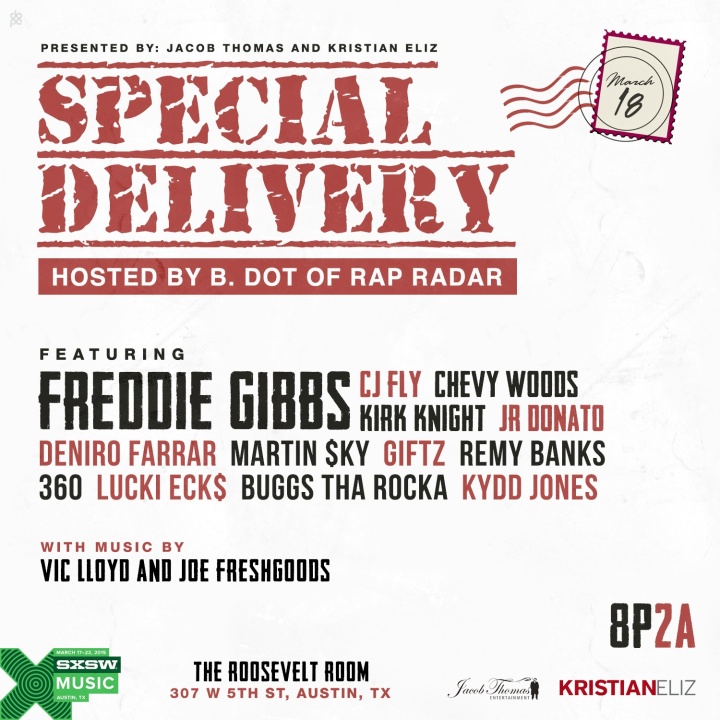 The music festival runs from Tuesday 17th March – Sunday 22nd March, and for the third consecutive year, newly re-crowned “Cincinnati Hip Hop Artist of the Year” Buggs tha Rocka will be performing. Having released his new album “Scattered Thoughts of an American Poet” in December 2014 which received widespread international press coverage, he penned a new two album deal in January this year with Talib Kweli’s Javotti Organization as part of a new recording duo “Space Invadaz” which sees Buggs team up with Donte from the group MOOD.

Buggs will be performing at the Special Delivery event on Wednesday 18th March at The Roosevelt Room, 307 W 5th Street Austin, and is scheduled to appear on stage around 8.45pm. The event is headlined by Freddie Gibbs and hosted by B Dot of Rap Radar.

Whether performing on multiple occasions at SXSW and A3C in Atlanta, or at clubs around the country, Buggs’ shows are always full of energy as you can see from this clip of him performing with Talib Kweli in 2013

Any members of the press & media who are attending SXSW and would like to meet with Buggs tha Rocka and his team and take in his live set, email UrbanElite PR via our CONTACT SECTION with your details and we’ll make the necessary arrangements

You can keep up to date with Buggs on twitter @BuggsThaRocka