During their recent visit to NYC to promote the new album “Omerta”, M.I. and DJ Cutt of Constant Deviants caught up with Rapstation’s Tim Einenkel in Brooklyn to talk through a number of subjects

They discuss the concept behind the album, and the metaphorical role playing element adopted via the personas of Lucky Luciano and Meyer Lansky. They delve deep into the specific thought process involved and differentiate between a perceived “mafiosa rap” approach to one which juxtaposes circumstances of four people with identical heritages. 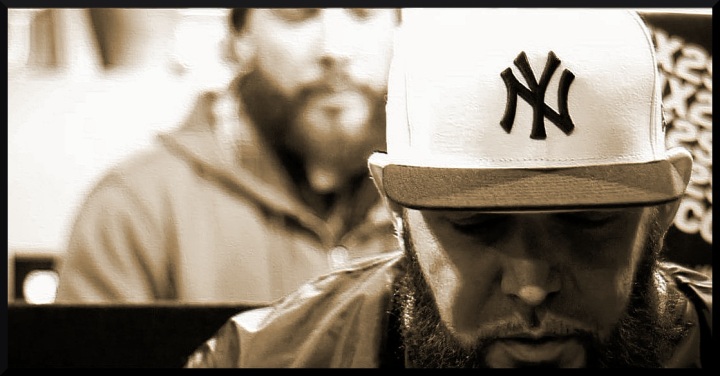 The discussion moves to the duo’s writing and recording process, comparing when they formed in Brooklyn to the current dynamic of operating from Baltimore and New Jersey. Appropriately at this point they talk more about their back catalogue and explain why they still give priority to producing an album as a cohesive body of work.

DJ Cutt then speaks more on his overall approach to production, how he determines the feel for a record and the various musical genres he sources for samples. Giving his thoughts on the diversion hip hop and rap has taken over the years, he suggests his own style is born of “tunnel vision”

Meanwhile M.I. explains why very few artists have had any longlasting influence on him, instead outlining his alternative sources of inspiration, and speaks on the broader issue of differing approaches to “the art of rhyme” through each generation.

Ending with their thoughts on the best scene from “Goodfellas”, the interview can be listened to in full via the AUDIO STREAM

The album is available to buy as a digital download from Six2Six Records BANDCAMP while CD and vinyl formats are being distributed worldwide by Fatbeats from July 15th.

All media, press and radio station Dj enquiries regarding Constant Deviants can be sent to us at UrbanElite PR, contact details are HERE