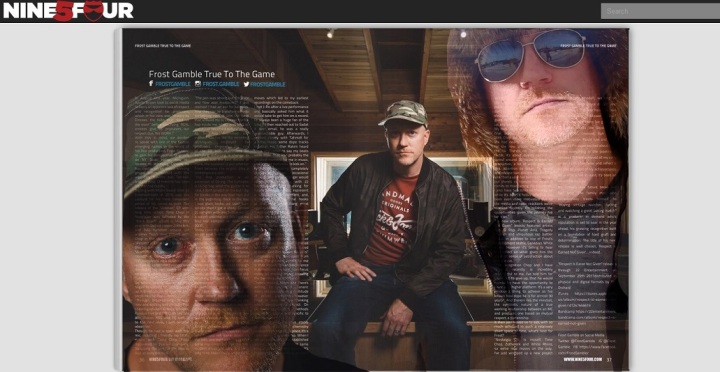 The past 12 months has seen NY State hip hop producer Frost Gamble emerge as one of the fastest rising names in the game.

Now relocated to Winnipeg, Canada, he signed with Miami’s 22 Entertainment on the back of his track “Honey” with Detroit rapper ZotheJerk being included in the label’s “God Bless Dope Rappers” compilation which included Royce da 5’9″, Crooked I, Kid Vishis and Horseshoe Gang in January 2016.

In November last year, he released the “Veteran” EP with long time affiliate Tone Chop, and the pair have just released the subsequent album “Respect Is Earned Not Given” on September 29th which features Kool G Rap, Planet Asia, rap battler DNA and Tragedy Khadafi. In May, he released the album “Black Beach” with ZotheJerk and his collaborative EP with Tragedy Khadafi “Rare Fabric” drops October 20th

Currently working on remix projects for Royce da 5’9″ and Horseshoe Gang, his new solo album “I Missed My Bus” which includes guest artists KXNG Crooked, Rah Digga, Skyzoo, Ruste Juxx, Guilty Simpson, Ras Kass and many more is due out in the first half of 2018.

Online publication Nine5 Four Magazine who haver a focus on both Canada and the States have just published a new in-depth feature on Frost. In “flip-through” format, the article appears on page 36 and can be read HERE

All of his releases with 22 Entertainment are available from the label’s BANDCAMP store. “Respect Is Earned Not Given” is also available from Amazon, iTunes and Spotify on CD, digital mp3 and streaming formats.

Chop & Frost release a new animated video for the album track “Bing Stories” next week and are then in New York City October 16th & 17th meeting with media including a guest appearance with DJ Eclipse on his Sirius XM “Rap Is Outta Control Show”.

All press, media and radio station inquiries regarding Frost Gamble, Tone Chop, ZotheJerk and the album releases, including requests to interview Chop & Frost in NYC on October 16th & 17th, can be sent to us at UrbanElite PR. Click the link for our Contact Details