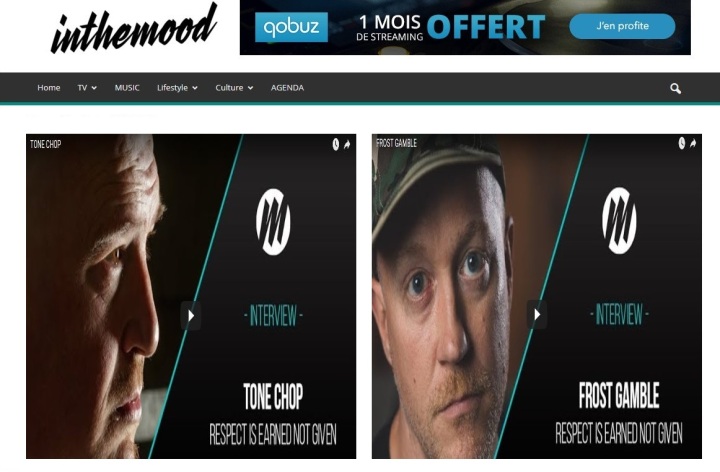 NY State rapper & producer duo Tone Chop & Frost Gamble [now resident in Canada] sat down recently with French online magazine In The Mood TV to discuss their new album “Respect Is Earned Not Given” which released through 22 Entertainment on September 29th.

During the interviews which were filmed exclusively for the magazine’s Youtube channel, the pair discuss the themse and concepts behind the album and also give a behind the scenes account of their working relationships with featured artists Kool G Rap, Planet Asia, Tragedy Khadafi and rap battler DNA.

Watch the interviews in full

Listen to the stream on Soundcloud

The duo are in NYC on Monday October 16th and Tuesday October 17th meeting with press and media, including appearing as guests on DJ Eclipse’s Sirius XM ‘Rap Is Outta Control” show. On Tuesday they will launch the new animated video for their album track “Bing Stories”.

Look out for more interviews and reviews in the weeks ahead, and connect with the pair on social media via Twitter @ToneChop & @FrostGamble, IG @ToneChop & Frost.Gamble & over on their joint Facebook Page

All press, media and radio station inquiries regarding Tone Chop, Frost Gamble and the album “Respect Is Earned Not Given”, including interview requests, can be sent to us at UrbanElite PR. Click the link for our Contact Details.