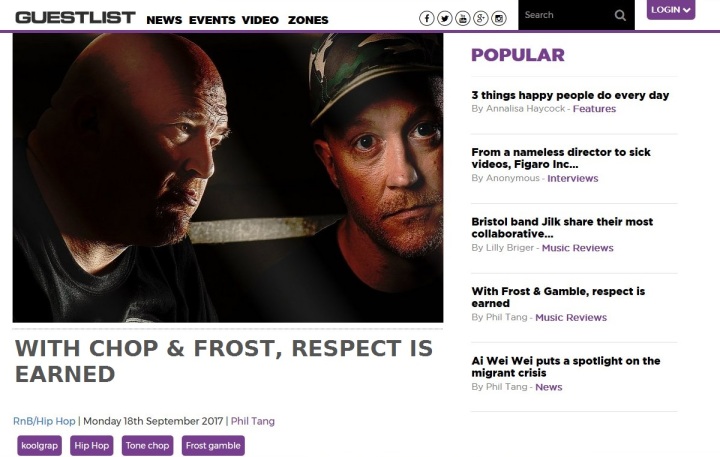 With just over a week until the release of their new album “Respect Is Earned Not Given” on September 29th, eastcoast rapper & producer duo Tone Chop & Frost Gamble have been given another ringing endorsement, this time via London’s Guestlist Network Magazine.

Summarising “Tone & Frost look set to continue on their upward trajectory with another quality record to add to their ever growing solid back catalogue“, you can read Phil’s article in full HERE.

Distributed worldwide by The Orchard, “Respect Is Earned Not Given” will be available on digital & CD formats, including online stores such as iTunes & Bandcamp

Look out for more international press and media coverage of the new release in the weeks ahead. The pair will be in NYC on the 16th & 17th October promoting the new album, and will appear as guests on DJ Eclipse’s “Rap Is Outta Control” show on Sirius XM Hip Hop Nation during their time there.

All media enquiries, including requests to interview the pair in NYC October 16th & 17th, or radio DJ requests for full quality mp3s of their singles for airplay, can be sent to us at UrbanElite PR. Our contact information is HERE