Filmed in downtown Newark just before the turn of the year, the pair trade verses over a hard edged gritty beat produced by Barcelona’s Sumerio Square.  Set on a verbal warpath, the seasoned veterans deliver punchline salvos of hard bars against weak representations and pale imitations in equal measure, dismantling defences with the ease of prize fighters earning stripes for their home State.  Some spicy heat for the street, 050 Dat !

DJ’s who would like any of the tracks for airplay, or any members of the media and press with enquiries regarding Tru Trilla and the album can send all requests to us at UrbanElite PR. Our contact details are available HERE

“Warzone” by Brick City’s Tru Trilla features long time affiliate Fly Kwa and fellow 050 Boyz member RIQ, and is the first to be taken from “The Seymour Chronicles EP” out on March 17th.

All go in on the hard bars and hooks, with Joey Loax’s production delivering the classic hip hop sound of the east coast. This one bangs!

Already on international rotation, “Smoke Filled  Rooms” mixes electronica, turntablism and South Asian flavas to journey into the dark underbelly of the inner city with rhymes depicting a vision of drug squalor hell, while the booming kicks and soaring strings of “Skitzophonetic” provides the dramatic backdrop for a verbal tirade against generic conformity.  Bonus cut “That All U Got?” invokes the spirit of Ali & Foreman leaving industry machinations slumped in the corner, towel thrown.  The art of storytelling has returned on a release spanning all eras.

Taken from the “Natsukashii EP” out June 7th, the second in their ‘Lazarus’ series following April’s “Y’All in Meltdown EP”.

All media and DJ enquiries regarding this release and New Dawn Records more generally can be sent to us at UrbanElite PR, our contact details are available HERE 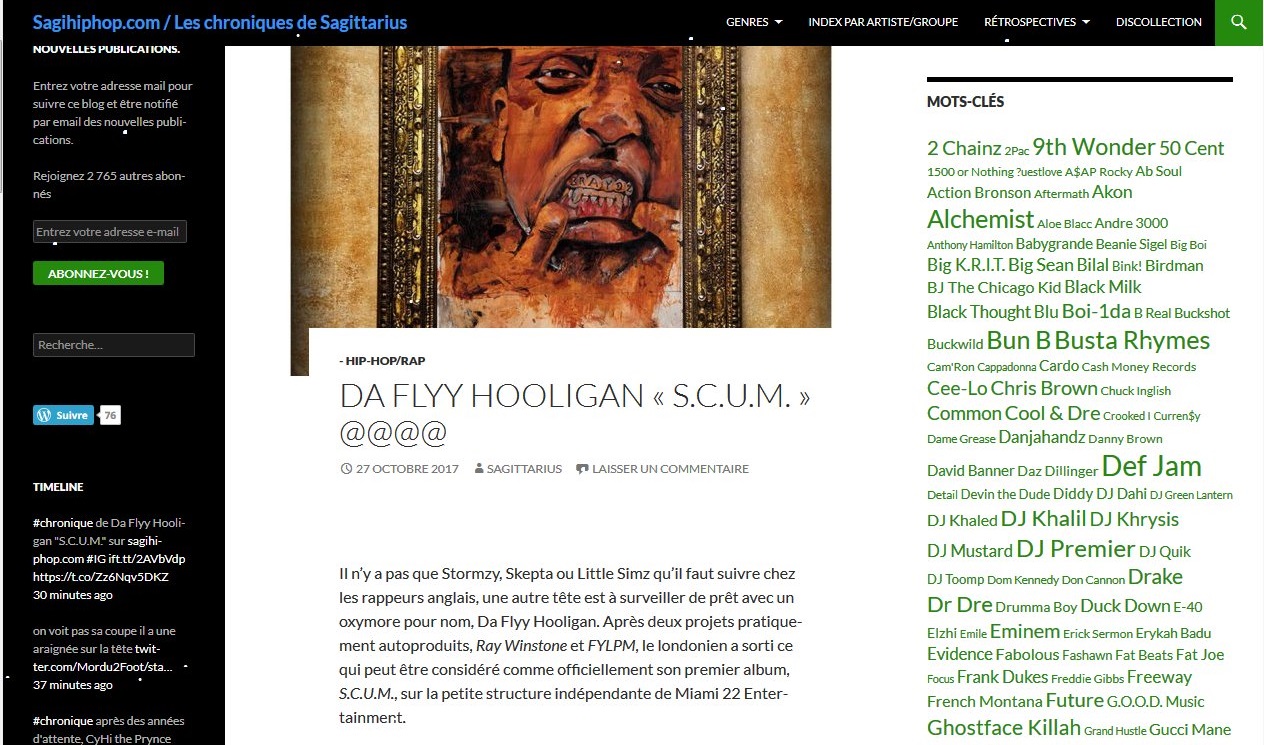 One of the most creative and gifted lyricists to emerge from London’s burgeoning rap scene, Da Flyy Hooligan released his new album “S.C.U.M.” on October 27th.

In a rare step for a British hip hop artist, he signed with a US label in the shape of 22 Entertainment for the release which also includes guest featured artists Westside Gunn and Hus Kingpin.

“S.C.U.M.” is available to buy on both CD and digital formats from multiple online stores worldwide including Amazon, Bandcamp, iTunes and Spotify

French online magazine “Sagi Hip Hop” has just published a new 4 star review reflecting the quality of the production by Agor, compared in style to The Alchemist, and the fierce rhyme skills of Harlesden’s finest.

READ THE ARTICLE IN FULL, WITH ENGLISH TRANSLATION AVAILABLE, HERE 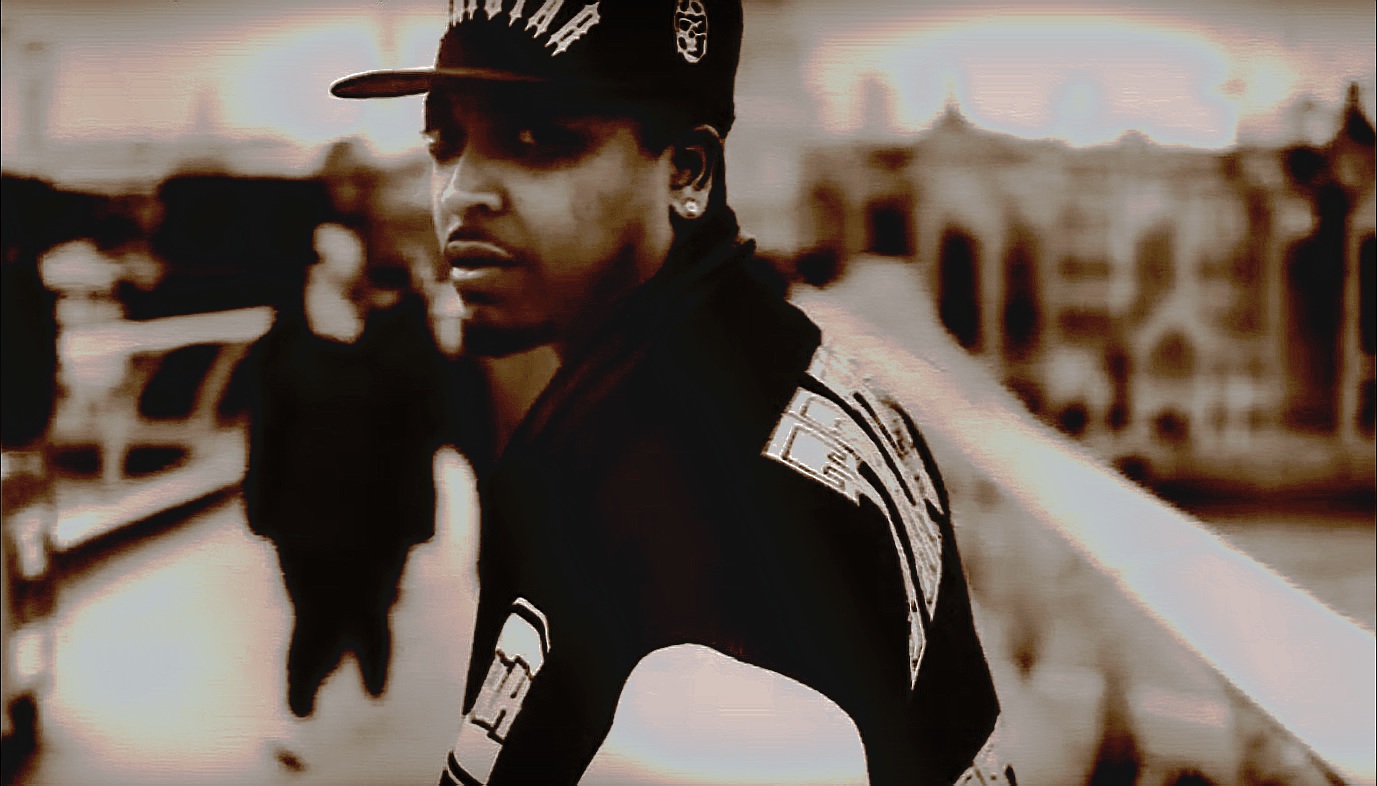 He also gave his first interview in two years recently, speaking about his career, artistic and album concepts, and described in detail his long standing bond with the late Sean Price.

The album stream is also available to hear on Soundcloud

All international media, press and radio station enquiries regarding Da Flyy Hooligan and his new album “S.C.U.M.” can be sent to us at UrbanElite PR. Our contact information details are available HERE

The pair were in New York a few weeks back promoting the album and were guests on DJ Eclipse’s Rap Is Outta Control show, broadcast now on their new slot every Thursday from 10pm – 12pm EST on Sirius XM’s “Hip Hop Nation” Channel 44.

As is customary, the show ends with a freestyle filmed by Bryan from The Beeshine TV. First broadcast live on air October 16th, the footage of Tone Chop & the show’s other guest Passport Gift has just been uploaded to Youtube. Check it out

Chop & Frost will be releasing a brand new track on November 22nd. Meantime check out the album stream on Soundcloud.

Frost has also just released his EP “Rare Fabric” with Tragedy Khadafi and is finishing his new solo album “I Missed My Bus” which includes guest featured artists Conway, Rah Digga, Crooked I, Ruste Juxx, Skyzoo, Ras Kass, Guilty Simpson and many more. Look out for that around the first half of 2018.

All international press, media and radio station DJ enquiries regarding Tone Chop, Frost Gamble and the album “Respect Is Earned Not Given” can be sent to us at UrbanElite PR. All our contact details are available HERE 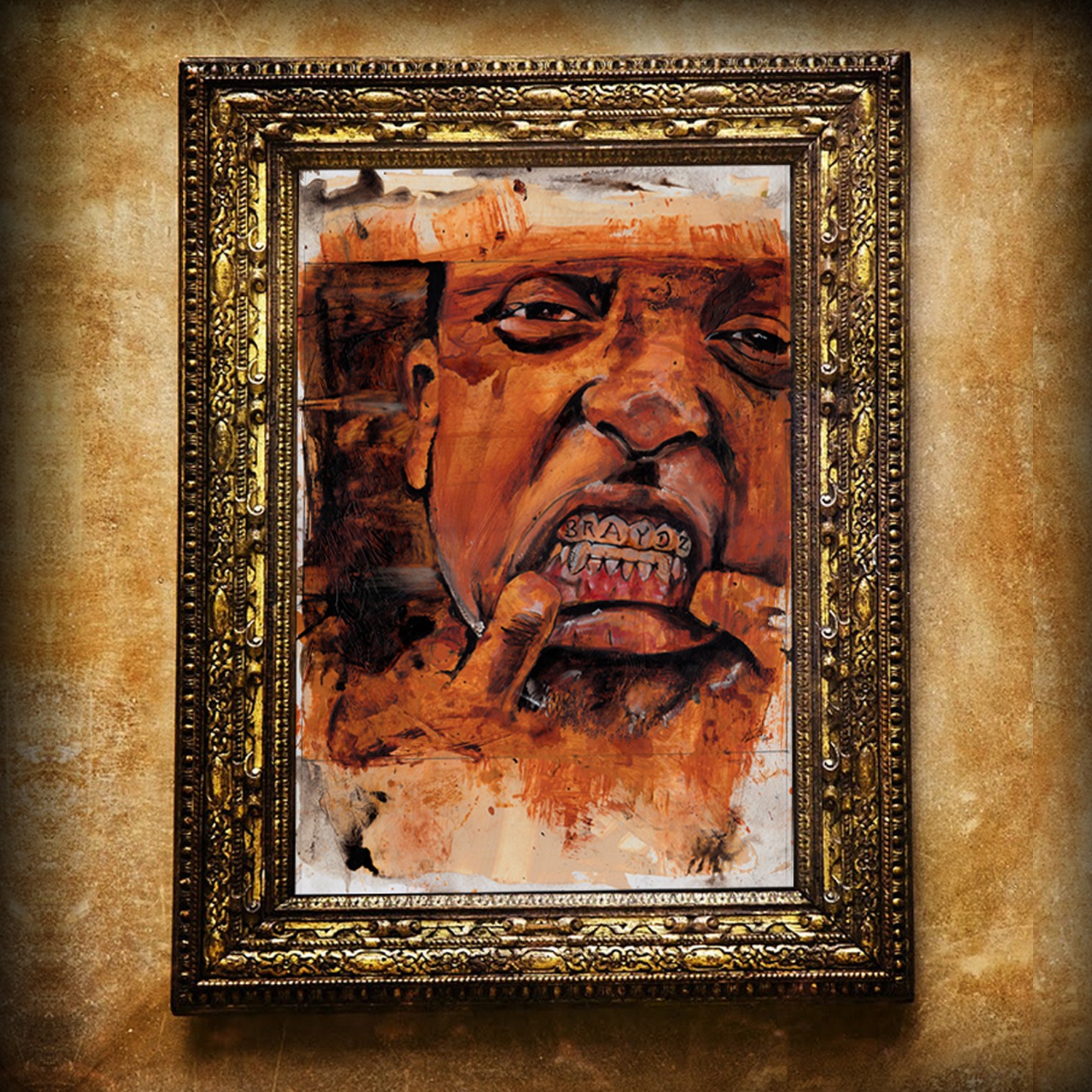 In an extremely rare step for a British hip hop artist, he signed with a US label for the release, Miami’s 22 Entertainment. Produced entirely by Agor, featured artists are current US luminaries Westside Gunn and Hus Kingpin, and availability is on multiple formats from stores worldwide including Amazon, Bandcamp, iTunes and Spotify.

Two early reviews have just been published, both from the States. One is by Youtube channel “The Report Card Podcast” and the other by “Balcony Life Blog”. Check out what they had to say :

Watch the video of The Report Card Podcast review 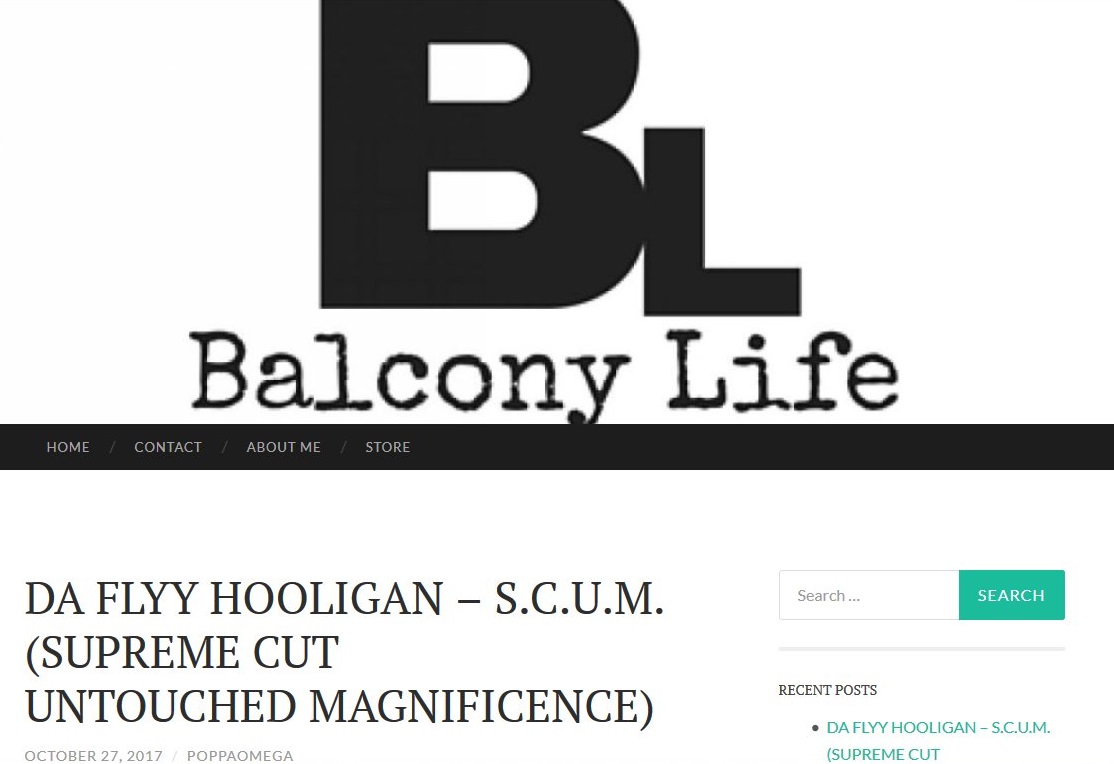 Look out for more reviews of the album in the coming weeks and a new official video due to launch on November 6th. Meanwhile, connect with DFH on social media via Twitter, IG and Facebook

All international press, media and radio station DJ inquiries and requests regarding Da Flyy Hooligan and the new album “S.C.U.M.” can be sent to us at UrbanElite PR. Our contact information details are available HERE

Long considered as one of the most creative and gifted lyricists at the forefront of the UK’s burgeoning rap scene, he also spent time in NYC where early comparisons dubbed him “the new Slick Rick” while working with the late Sean Price, Sav Killz, Prince Po and Dead Prez.

Featuring Westside Gunn and Hus Kingpin, “S.C.U.M.” is produced entirely by one of England’s hottest new emerging names Agor, his sophisticated and lavish soundscapes providing the perfect backdrop for charismatic portrayals of an irrepressible underclass. Stylish and compelling, a series of bold, satirical and uncomprimising rhymes intelligently depict contemporary aspirations, and reaffirms his international reputation as a serious force in rap’s new wave.

The album is available on CD and digital formats from multiple onlines stores worldwide including Amazon, iTunes and Spotify

All internation press, media and radio station DJ inquiries and requests regarding Da Flyy Hooligan and the new album “S.C.U.M.” can be sent to us at UrbanElite PR. Our contact information details are available HERE 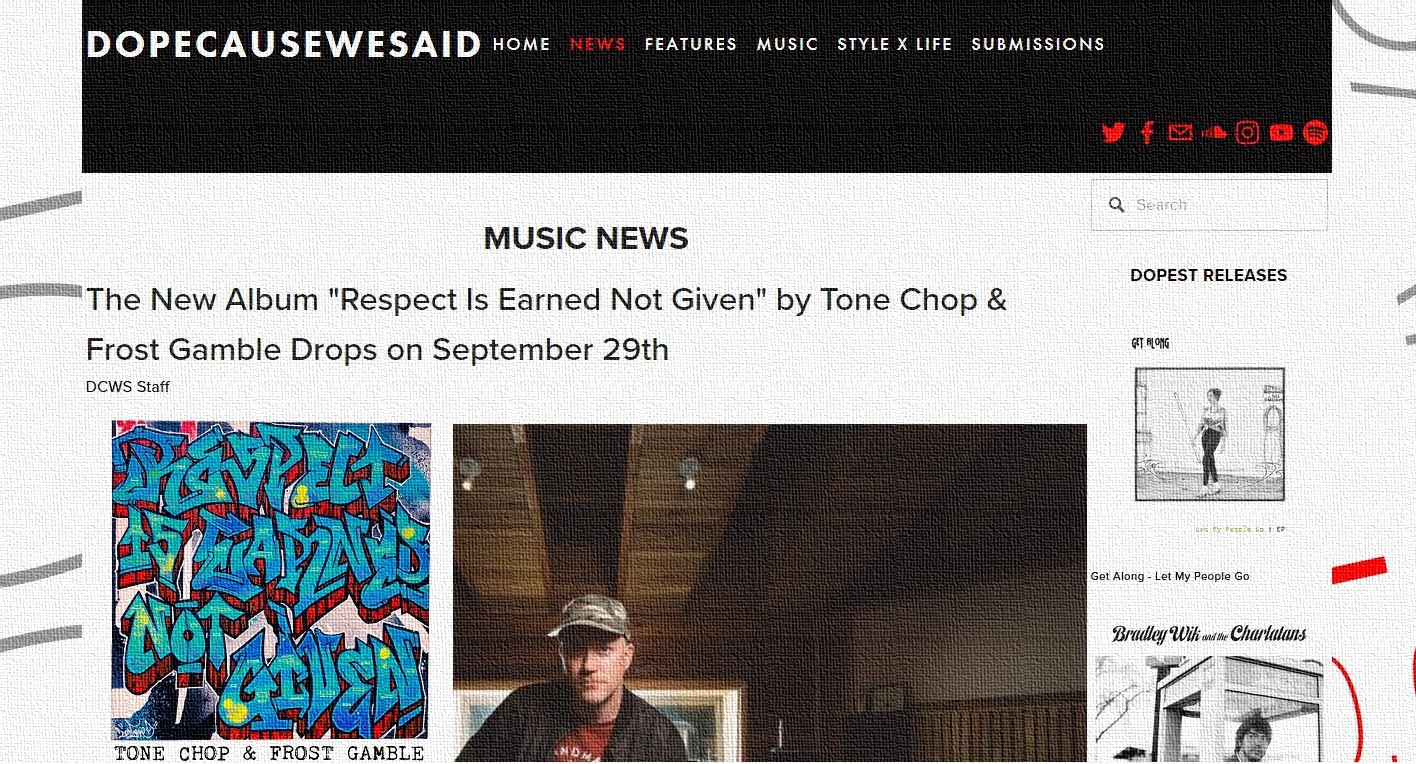 Releasing through Miami label 22 Entertainment who have signed London rapper Da Flyy Hooligan for his new album “S.C.U.M.” ft Westside Gunn & Hus Kingpin, and whose back catalogue includes Royce da 5’9″, Bumpy Knuckles, Fashawn, DJ Premier, KXNG Crooked, J-Kwon and Joe Budden, “Respect Is Earned Not Given” will be available on CD and digital formats from most online stores including Amazon, iTunes and Bandcamp. 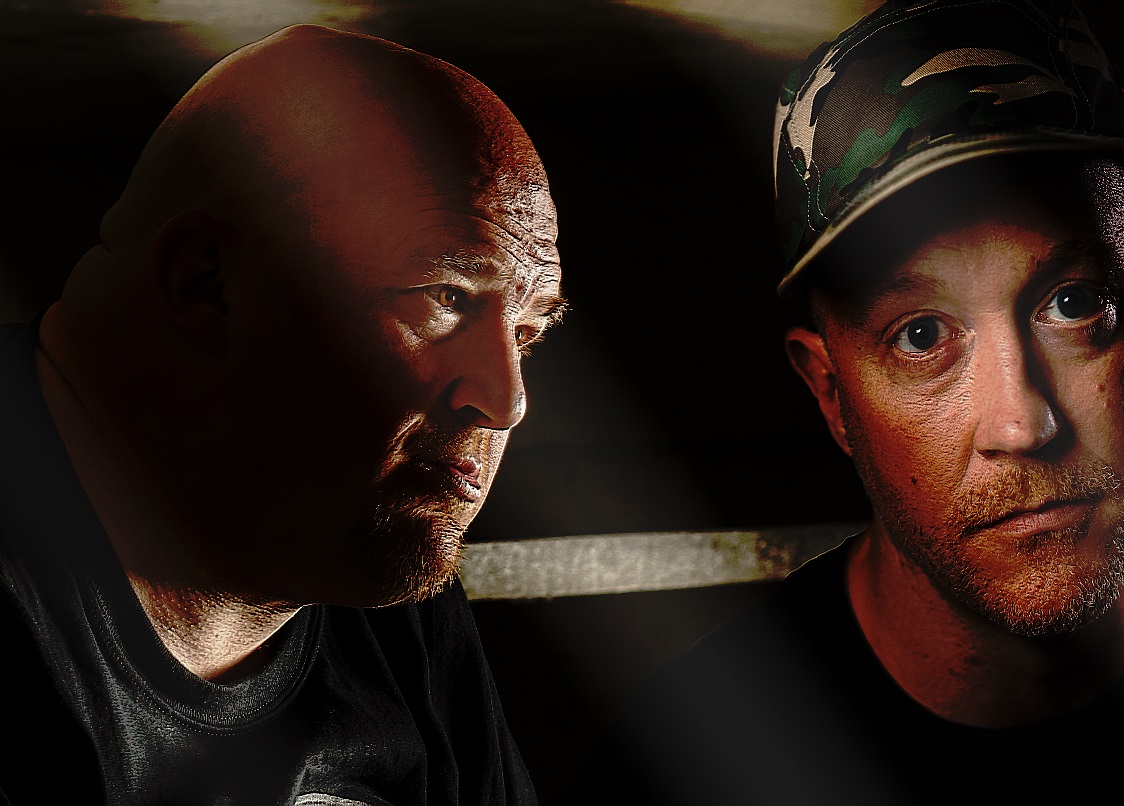 The pair will be appearing as guests live in the studio with DJ Eclipse on the Rap Is Outta Control Show [Sirius XM Hip Hop Nation] Monday October 16th as they hit NYC for a couple days promoting the new album. They have enjoyed worldwide radio support for the singles released to date, check out the streams :

“In the Streets” ft DNA

On October 20th, Frost will release his collaborative EP with Tragedy Khadafi “Rare Fabric” and is near completion of his new solo album “I Missed My Bus” featuring Ruste Juxx, Skyzoo, Guilty Simpson, Rah Digga, KXNG Crooked, Ras Kass and many more, due for release in early 2018.

Look out for international media coverage of the new album in the coming weeks with more news, reviews and interviews imminent, and keep up to date with the pair on social media via twitter @ToneChop & @FrostGamble, on IG @ToneChop & @Frost.Gamble and over on their Joint Facebook Page

All international media & press enquiries regarding Tone Chop & Frost Gamble including requests to interview the pair in person during their visit to NYC and radio station DJ’s looking for full quality mp3s of their singles for airplay, can be sent to us at UrbanElite PR. Our contact details are HERE 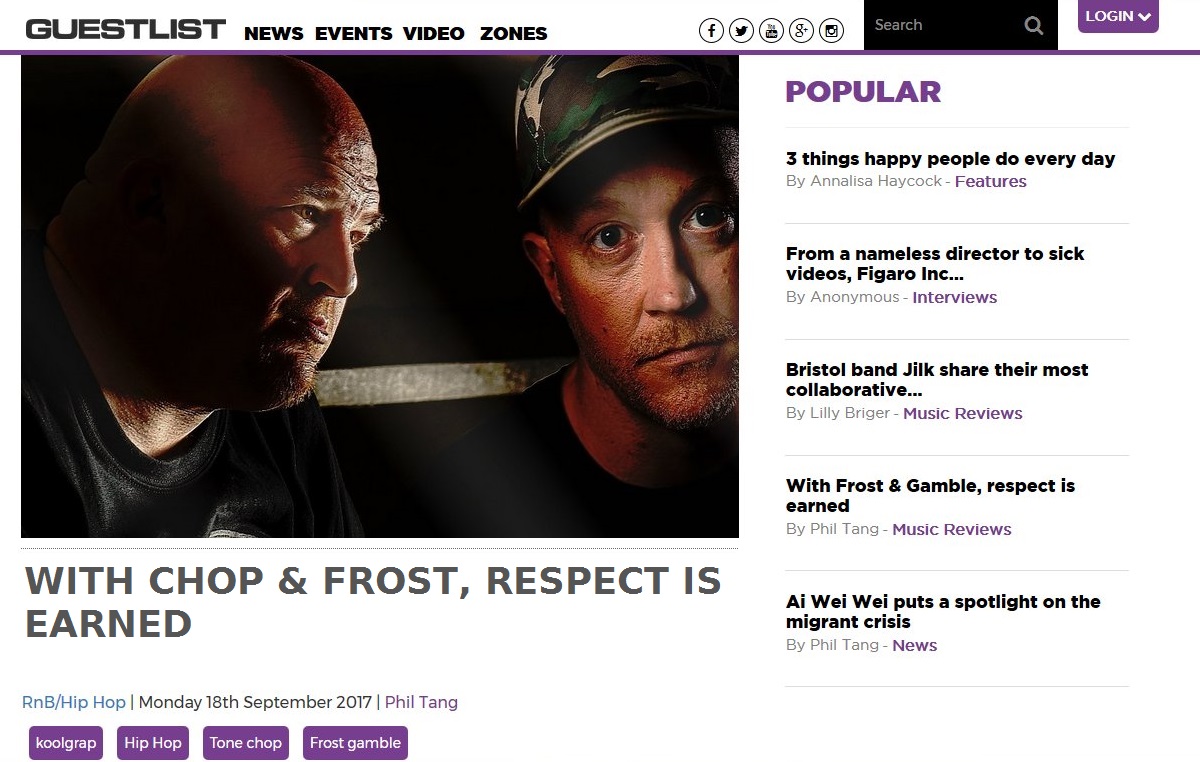 With just over a week until the release of their new album “Respect Is Earned Not Given” on September 29th, eastcoast rapper & producer duo Tone Chop & Frost Gamble have been given another ringing endorsement, this time via London’s Guestlist Network Magazine.

Summarising “Tone & Frost look set to continue on their upward trajectory with another quality record to add to their ever growing solid back catalogue“, you can read Phil’s article in full HERE. 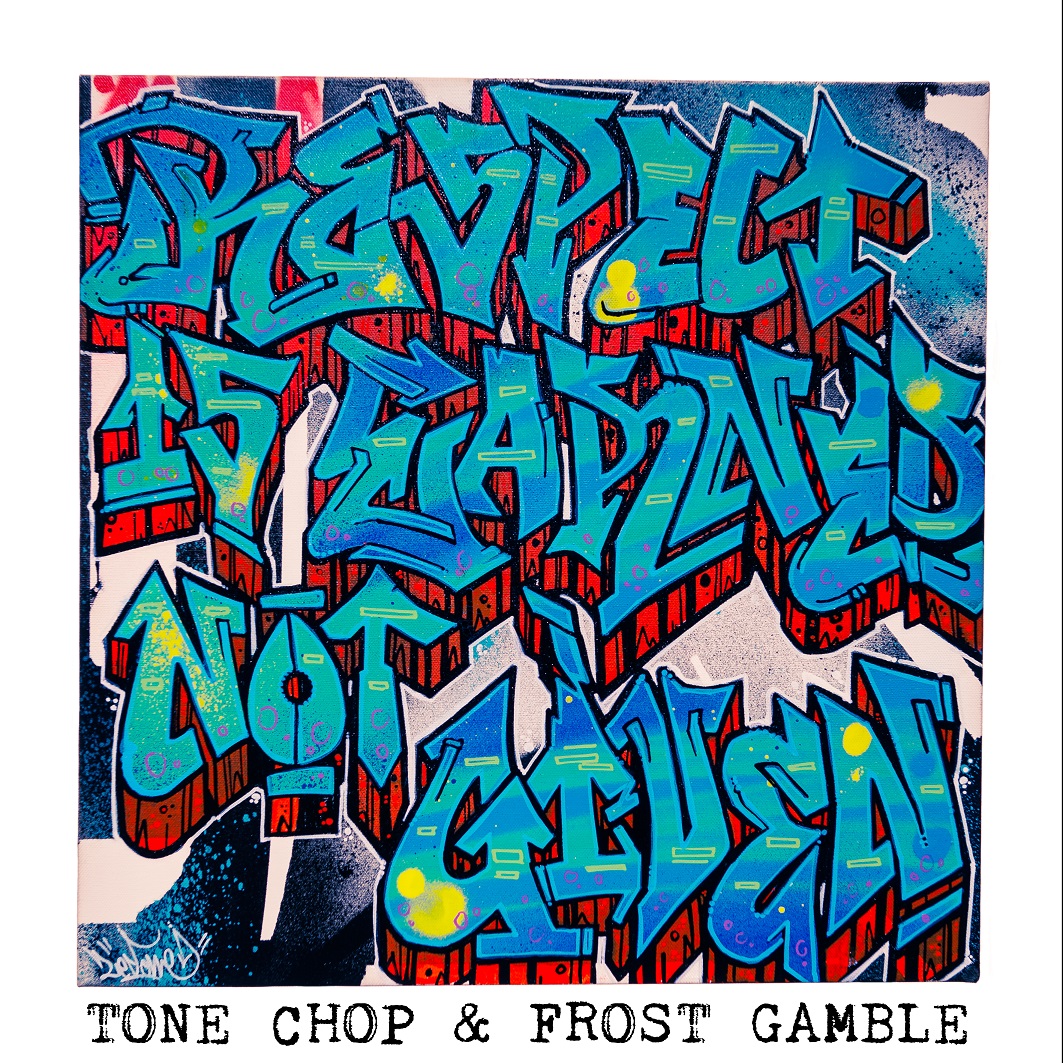 Distributed worldwide by The Orchard, “Respect Is Earned Not Given” will be available on digital & CD formats, including online stores such as iTunes & Bandcamp

Look out for more international press and media coverage of the new release in the weeks ahead. The pair will be in NYC on the 16th & 17th October promoting the new album, and will appear as guests on DJ Eclipse’s “Rap Is Outta Control” show on Sirius XM Hip Hop Nation during their time there.

All media enquiries, including requests to interview the pair in NYC October 16th & 17th, or radio DJ requests for full quality mp3s of their singles for airplay, can be sent to us at UrbanElite PR. Our contact information is HERE 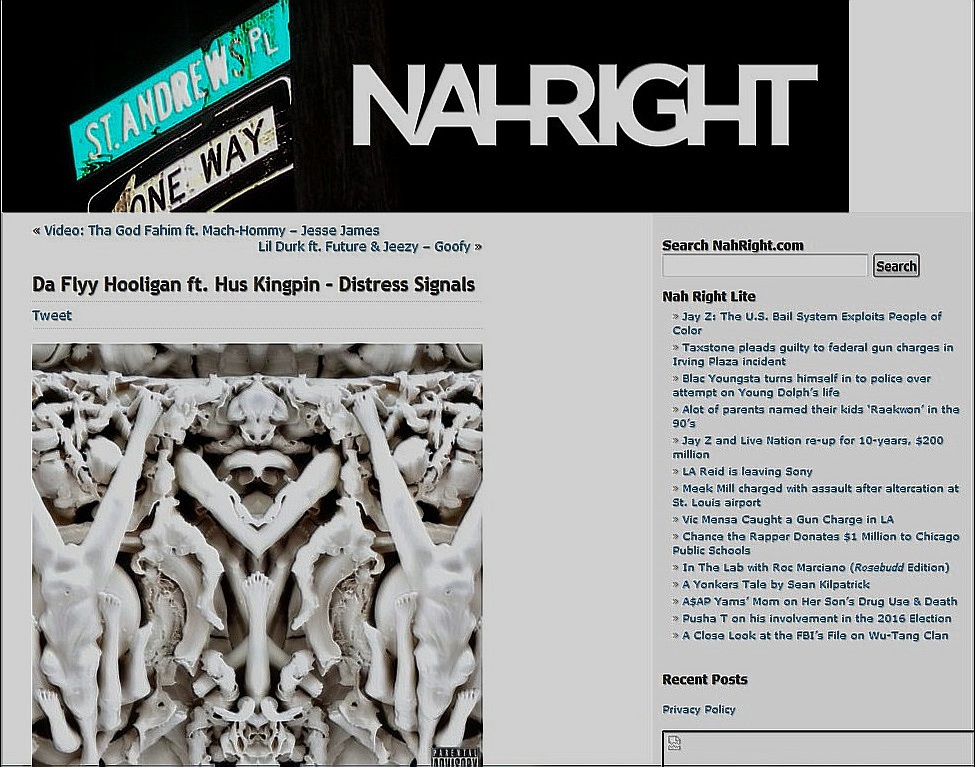 “Hus Kingpin has always been a supporter of what I do. When he reached out and said ‘Let’s get one in for the history books‘ Agor and I knew Distress Signals was the perfect art piece for this wonderful collaboration.”

Available to buy on iTunes and Bandcamp

All media & press enquiries regarding the new album, including DJ requests for full quality dirty & clean mp3s of the single “Distress Signals”, can be sent to us at UrbanElite PR. Our contact information is available HERE