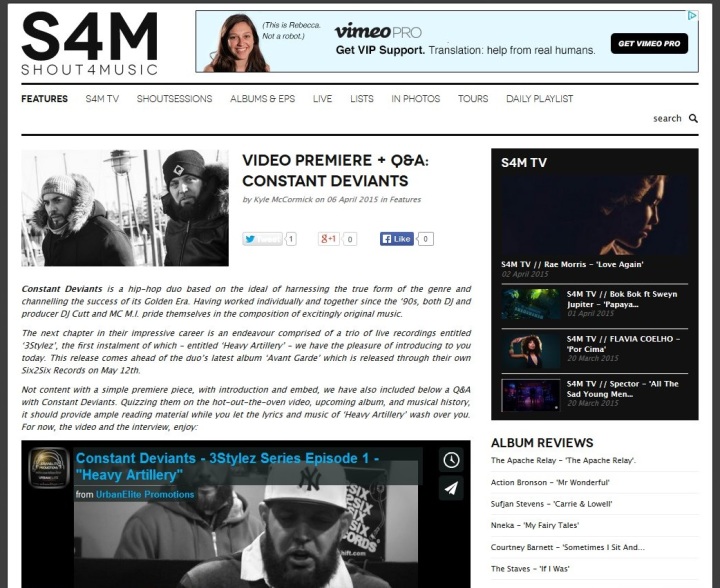 With over 20 years in the game operating within both the Major & independent sectors, Constant Deviants release their new album “Avant Garde” on their own Six2Six Records label on 12th May. It will be available worldwide on vinyl, CD and digital formats.

Having released a new movie “Swiss Banks” to Youtube with their SWC affiliates in Switzerland in the past couple of weeks, the Baltimore & New Jersey duo have also just completed the filming of a new trilogy of freestyles. The “3Stylez Series” shows the pair performing live and direct, with the first of these, “Heavy Artillery”, launched today as part of a feature published by the UK’s online Shout 4 Music

In the interview, the pair discuss the running of their own label, the challenges faced to remain prolific and how they have maintained a high level of output over the years, they give their thoughts on the new Tidal streaming service, and outline their touring plans as well as the thought process behind the new album

Look out for Epsiodes 2 & 3 from the “3Stylez Series” being launched in the weeks ahead along with extensive international media coverage of their album release with a mix of reviews and interviews. Any press & media inquiries regarding Constant Deviants can be sent to UrbanElite PR via our CONTACT SECTION