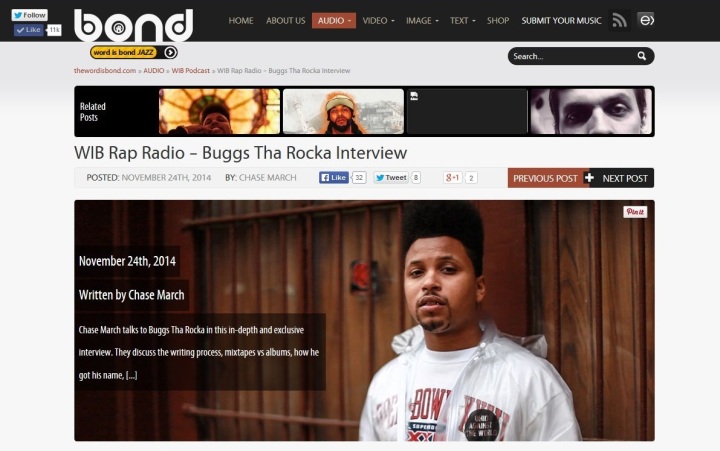 Cincinnati MC Buggs tha Rocka sat down with The Word is Bond’s Chase March recently to discuss his new album “Scattered Thoughts of an American Poet” which releases on 10th December 2014.

Broadcast first on 17th November on CHRW 94.9FM(London Ontario) and repeated Saturday 22nd November on CFMU 93.3FM (Hamilton Ontario) for the WIB Rap Radio Show, the interview has just been streamed on the publication’s Soundcloud.

The album includes production and features from many local artists in Ohio, and also includes contributions by !llmind, Jake One, Tanya Morgan, Chuck Inglish of The Cool Kids and MOOD. Buggs has been busy conducting interviews with many international publications recently, and filming new videos for the release. He will soon release a re-cap video of the Reflection Eternal reunion event held in Cincinnati’s Rhinegeist Brewery on 30th October, a night which of course featured Talib Kweli, Hi Tek, Buggs, DJ Clockwork, MOOD and many others

All press & media enquiries regarding Buggs tha Rocka, requests for interview or requests for a promotional copy of the album Scattered Thoughts of an American Poet for review, can be sent to UrbanElite PR via our CONTACT SECTION