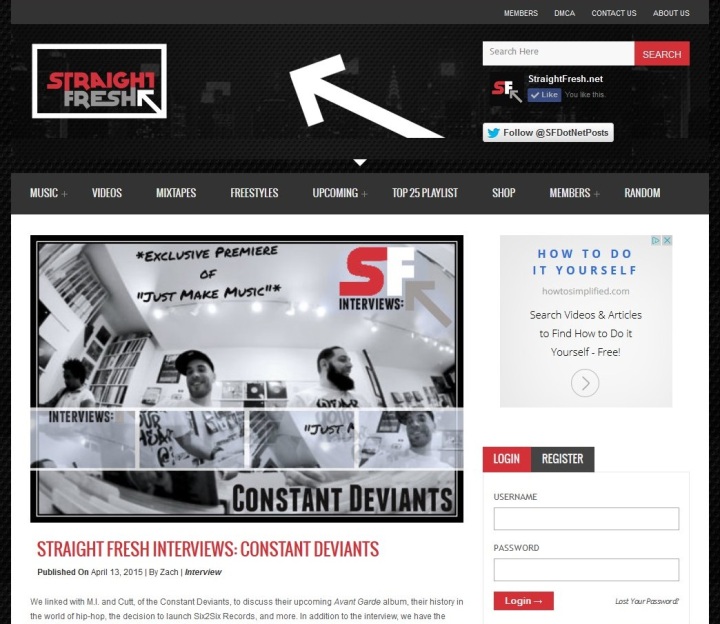 Constant Deviants release their fourth studio album “Avant Garde” on 12th May through their own Six2Six label on vinyl, CD and digital formats.

Been a busy time for the veteran Baltimore & New Jersey duo. Recently they released the film “Swiss Banks” with their partners in Switzerland SWC Records, completed filming of their freestyle series “3Stylez” and have been conducting interviews with a whole range of international media. Most recently, Emcee M.I. was seen on the new “Rapping with Leiberman” online tv chat show talking politics and hip hop with SiriusXM Host Jon Leiberman.

They have just dropped a bonus joint “Just Make Music”, recorded between albums and premiered by US online Straight Fresh as part of a new feature published on them today

In the interview the pair discuss the production process with the album down to the reason behind its title, and the decision to have only one featured artist Aye Wun appear. They then speak on how they first came together in the 90’s, and what brought them back together in 2009 after they had both worked in the major label sector, and the ethos behind the label Six2Six Records they set up at that time.

They also go into detail about the joint “Yup” they recorded with Rick Ross and N.O.R.E. in 2008, and provide details about how the film “Swiss Banks” was created, and give their thoughts on the current state of mainstream and independent hip hop as well as what has contributed most to their longevity in the game

Look out for more international media coverage on Constant Deviants in the weeks ahead leading up to the release of the album and beyond. Meantime you can connect with them on social media, Twitter @Cnstnt_Dvnts & @Six2SixShift and on their Facebook page “ConstantDeviantsMusic”