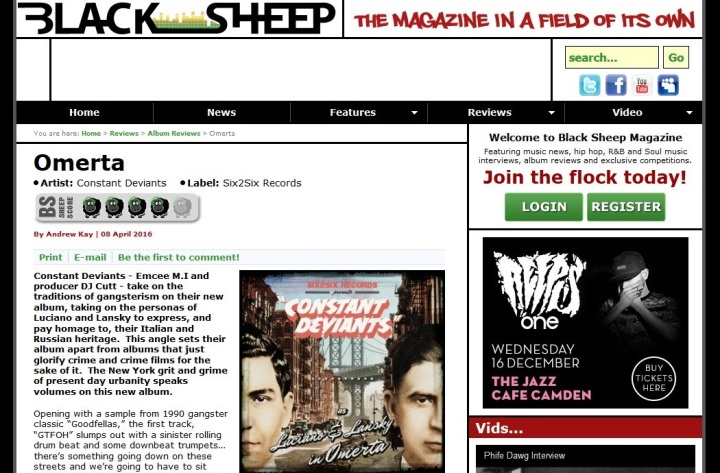 In this one, the pair have taken a slightly different approach in adopting a running theme and concept throughout in a similar vein to Kool Keith’s “Tashan Dorsett” and Prince Paul’s “A Prince Among Thieves”. Speaking on the idea behind it, Emcee M.I. is quoted as saying “It’s to put a little of the fun back into hip hop, not just throwing out beats and bars. A return to the days where the focus was on entertainment, relating imaginative stories and putting more emphasis on actual songwriting“.

Of course through their Six2Six label they have expanded their creative enterprises into movie making, so it’s in keeping with the mindset to be innovative while retaining their trademark sound.

In this early review published by the UK’s Blacksheep Magazine, contributor Andrew Kay grasps the point exactly and in conclusion remarks ““Omerta” is a solid slice of street knowledge. They don’t make albums like this anymore. The Golden Era has come full circle. Not before time.” READ THE FULL REVIEW HERE

We of course have had the benefit of hearing the album, and whether it’s because it is the first to be recorded where the pair were in the studio together for many years, the quality is superb and it’s little surprise the group themselves deem it to be their favourite album to date.

Look out for a lot of media coverage on this album in the months ahead together with more releases, the launch of a new video freestyle series “Tre Volte” and news of a special album launch event in NYC later in June. Keep up to date with Constant Deviants on TWITTER and FACEBOOK

All media, press and radio station DJ inquiries regarding the group and release can be sent to us at UrbanElite PR, our contact details are HERE