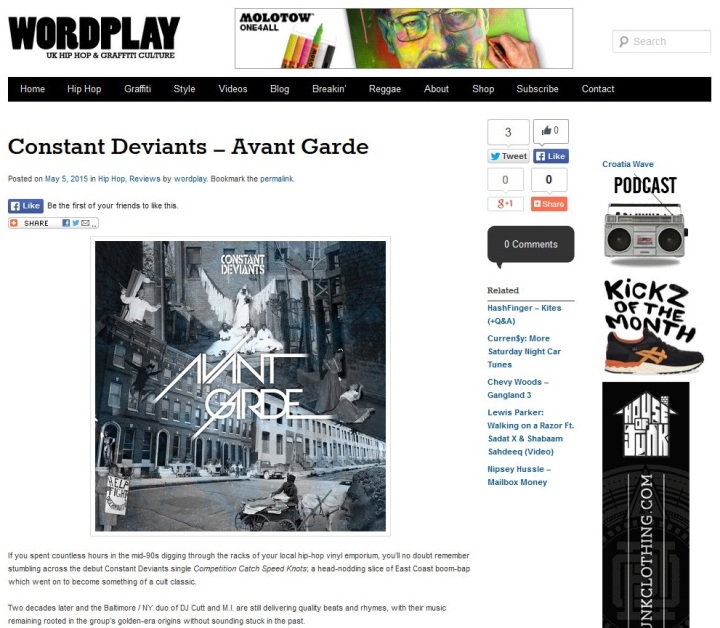 The UK’s Wordplay Magazine covers a broad spectrum of hip hop culture, music, breakin, graffiti, fashions and much more. They produce a high quality printed physical publication as well as having their online version.

They are the latest to run the rule over the new album “Avant Garde” by veteran duo Constant Deviants which releases on vinyl, CD and digital formats next week, Tuesday 12th May, through their own Six2Six Records imprint.

Maintaining and evolving their musical approach since releasing their debut 12″ Competition Catch Speed Knots in 1996 has earned them international recognition throughout the years, and this latest endorsement is written by journalist Ryan Proctor who also runs his own online platform “Old To The New”

You will also be able to watch Emcee M.I. appear on Miami’s 4ManKind TV Show tonight, 5th May, from 8pm EST, and the programme streams live at http://universemiami.com/4mktv/

Yesterday they leaked a previously unreleased track recorded between albums. “Thinkin” features another of the Six2Six Records roster, New York MC Rome. Check the stream out on Soundcloud :

M.I. will be travelling from Baltimore next week to meet up with DJ Cutt for a series of radio & media interviews which are due to include appearances on Beatminerz Radio and Not97. Further details to follow.

Any radio station DJs in New York or members of the press & media who would like to meet with Constant Deviants while they are in the city between Monday 11th May – Thursday 14th May inclusive can get in touch with UrbanElite PR. Our contact details are HERE

Connect with them online on twitter @Cnstnt_Dvnts & @Six2SixShift or on their Facebook Page. The label’s official site is HERE