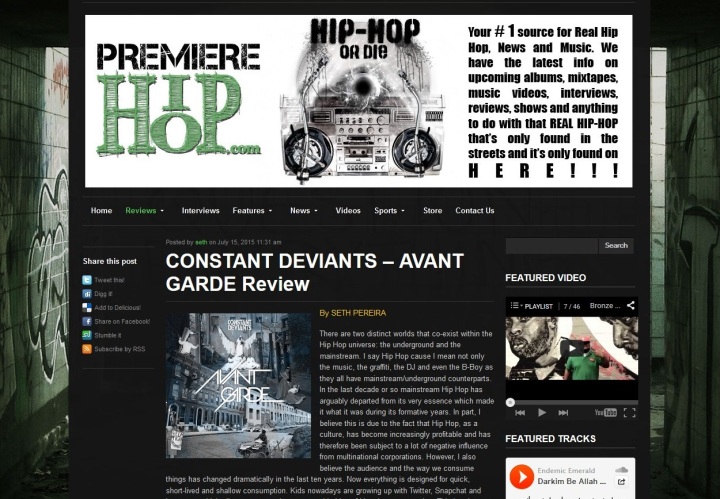 Been a couple of months since east coast duo M.I. and DJ Cutt released their fourth album “Avant Garde”, a release which received extensive international media coverage earlier in the year.

Just published yesterday is the latest review from US online Premiere Hip Hop, and you know that Sunez and the guys over there only rate artists with the true essence of hip hop at the heart of their music.

TAKE A READ AT THE REVIEW HERE

M.I. and DJ Cutt don’t let the grass grow under their feet. They have just completed filming of a new movie named after their self owned record label “Six 2 Six”, though the storyline has a different twist, and M.I. has just made his solo project “Psychedlic 60’s” available as a free download HERE

The duo are also spending time back in the lab preparing a new album which they hope to release next year to coincide with some European tour dates they are currently planning.

Any club owners or promoters interested in booking Constant Deviants for shows can contact us HERE or the group directly via their FACEBOOK PAGE. You can also connect with them on twitter @Cnstnt_Dvnts & @Six2SixShift

Check out the video for the single “Breathin” which reached Number 1 in the college radio charts in the Spring.