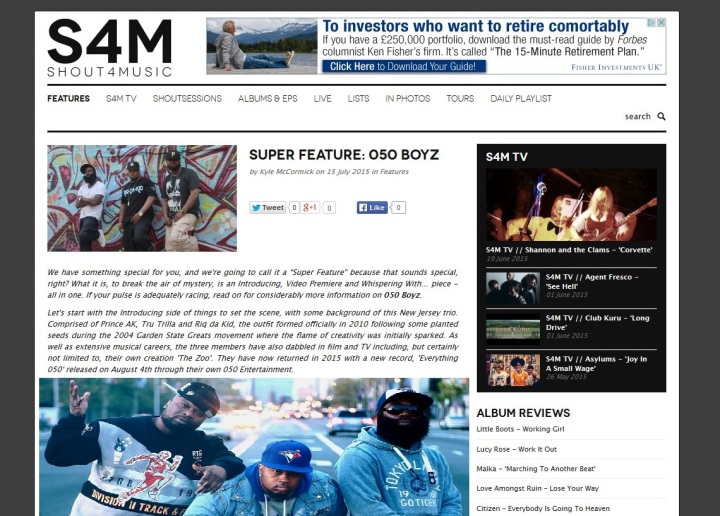 They have just published a “Super Feature” on New Jersey hip hop group 050 Boyz, combining an introductory piece, a “Picture Interview” and an exclusive video for their Shout Sessions series.

In the video, Tru Trilla, Riq da Kid and Prince AK perform “What Happened” live, a track taken from their album “Everything 050” which releases on 4th August. As with all the tracks throughout the album, it is produced by Clinton Place

READ THE FULL FEATURE AT SHOUT FOR MUSIC HERE

Veterans in the Garden State scene, they are joined on the album by long time associates Treach (Naughty by Nature), Tha Advocate, Ib The Druid, Lakim Shabazz, DoItAll (Lords of the Underground), Famiil and more. The energy’s high from start to finish, bangin beats with real gritty lyricism and wordplay, just what you’d expect from Emcees who came up through the Golden Era of the 90’s.

As another taster, check out the stream of their most recent single “DNA” seen recently getting the treatment by DJ Eclipse on Sirius XM’s Rap Is Outta Control Show. The group will be guests of DJ Eclipse on his WNYU Halftime Show on Wednesday 12th August

Look out for much more international media coverage on 050 Boyz and the album “Everything 050” in the weeks ahead together with more special track and video releases shortly. You can connect with them on FACEBOOK and on twitter @050_Boyz ( @PrinceAK_050 @RiqDaKid_050 @EgoFree2_050 & producer @ClintonPlace9 )

All press & DJ enquiries about 050 Boyz can be sent to us at UrbanElite PR, contact details are HERE