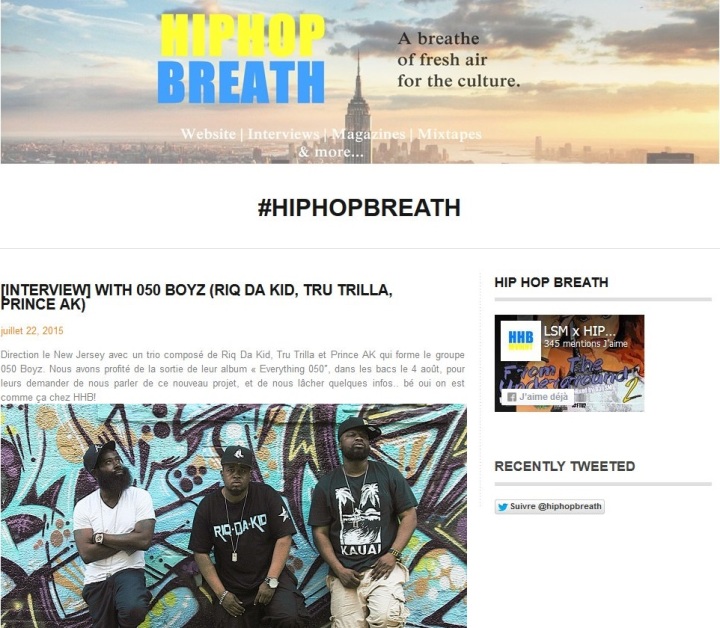 Newark hiphop group 050 Boyz release their new album “Everything 050” on 4th August, and in the run up, the trio of Riq da Kid, Tru Trilla and Prince Ak took time out to speak with French online magazine Hip Hop Breath.

In this interview they discuss how the group was formed, the concept and inspiration behind the group and the album and explain their long time association with the album’s sole producer Clinton Place. They then speak on the actual recording process and the involvement of so many other featured artists from the Garden State scene before each Emcee describes the highlight of their considerable careers to date

They have also just launched “Watch That (Bricks Mix)”, a new official remix of an earlier joint from their back catalogue.

The three Emcees display all of their trademark lyrical energy in this fuel injected banger, a combination of powerful rhymes and beats prevelant throughout the album which also includes features by Treach (Naughty by Nature), Lakim Shabazz, B Wells, Trilly Trills, Tha Advocate, DoItAll (Lords of the Underground), Famiil and IB the Druid.

CHECK THE AUDIO STREAM FOR “WATCH THAT (BRICKS MIX)” ON SOUNDCLOUD

Expect to see extensive media coverage in the weeks ahead regarding the group and the release. International media & press enquiries regarding 050 Boyz, and DJ requests for a full quality mp3 of the new joint can be sent to us at UrbanElite PR, contact details HERE