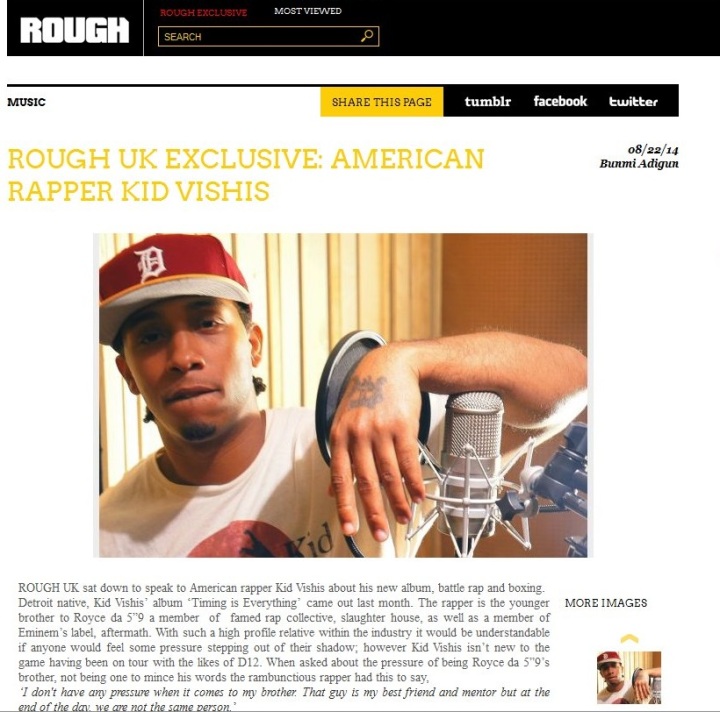 It continues to be a busy time for Detroit MC Kid Vishis since the release of his debut album “Timing is Everything” on 22nd July.

As well as putting plans together for tours and spending time in the studio recording a new EP and sophomore album, he has been conducting interviews with further media in the USA, UK and Europe, most recently with London’s Rough Magazine

Speaking with the publication’s Bunmi Adigun, he explains the working relationship he has with his older brother Royce da 5’9″ and the future direction which he feels differentiates the pair, he discusses the lyrical concepts in the album and the messages being conveyed while giving his thoughts on the state of lyricism within hip hop generally today, and finishes as a self confessed boxing fan speaking on his expectations for the Maidana / Mayweather re-match

“Timing is Everything” has received the largest amount of international press & media coverage of any debut independent hip hop / rap album release this year, and is available now worldwide on iTunes & Amazon. CD versions can be bought directly from the label Seven 13 Entertainment at www.seven13ent.com You can keep up to date with one of Detroit’s hottest emerging new talents on twitter @KidVishis

UrbanElite PR are still accepting international media & press communications with inquiries regarding Kid Vishis, and all requests for interviews or any other information can be sent to us HERE