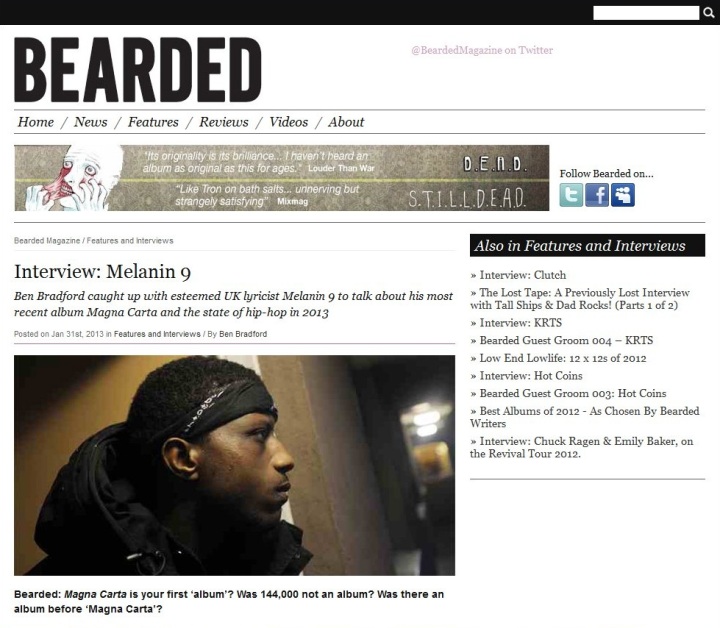 Ben Bradford is the latest journalist to sit down with London’s Melanin 9 and speak with him on his new album “Magna Carta”, previous releases “144,000” and “Orion’s Stencil” and his pick of current artists and the general hip hop scene today

Published by the UK’s Bearded Magazine, the feature also addresses the common practice of artists releasing tracks for free and the net benefit they hope to achieve.

You can read the whole review HERE

The album was one of UK hip hop’s standout releases of 2012, and the amount of press coverage in the UK and overseas is testament to the appreciation of the quality of lyricism on display. Singles and videos for “Landslide”, “Organized Democracy” and “White Russian ft Roc Marciano” have received international radio airplay and online support, in some cases to an unprecedented level.

“Magna Carta” is widely available on iTunes, and can also be ordered in CD physical format direct from http://m9ether.bandcamp.com

Melanin 9 is available for live dates, and any interested club promoters can contact him via his Bandcamp quoted above, his twitter account @Melanin_9 or an email enquiry can be sent to UrbanElite PR HERE

Thanks to Ben Bradford, Matt Bayfield & Suzi Ireland at Bearded for the feature, and you can follow the magazine on twitter @BeardedMagazine