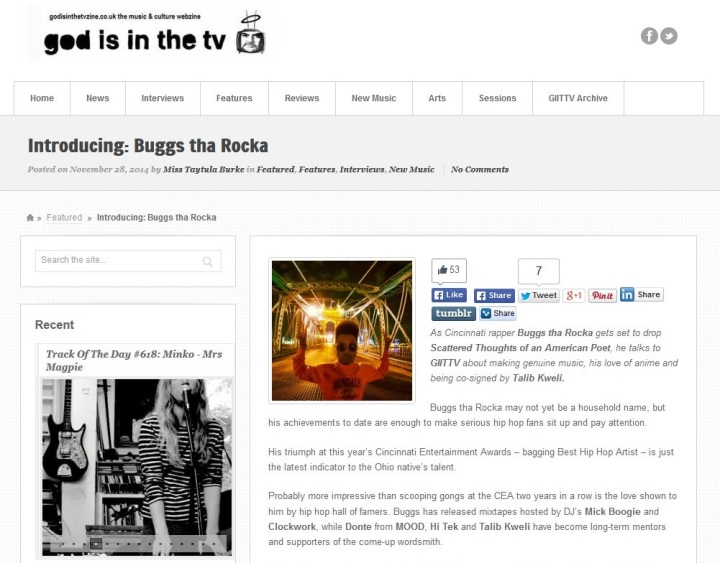 Their contributor Taytula Burke jumped on the phone recently with the Cincinnati Entertainment Awards’ “Hip Hop Artist of 2014” to discuss his new album “Scattered Thoughts of an American Poet” which releases on 10th December, and includes production by !llmind, Jake One, Hop Trax, Sal Dali and Kill Will, and features Tanya Morgan, Chuck Inglish, Phoenix Aphrodite, MOOD, Piakhan and Aida Chakra.

The pair also discussed his earliest influences and emergence from his days starting out as an artist to performing at events such as this year’s A3C Festival in Atlanta, his love of Japanese culture and animation, and he speaks on meaningful content and lyricism in hip hop today, and what inspires him to write

CHECK THE INTERVIEW IN FULL HERE

Having released previous mixtapes with Mac Miller’s tour dj, DJ Clockwork, “Scattered Thoughts of an American Poet” is Buggs first official album release for a number of years, but is the pre-cursor for a planned series of releases in 2015. As such, it will be made available as a free download from www.buggstharocka.com on 10th December. In the past couple of months, the artist & album has generated widespread international media interest, the results of which you will see over the coming weeks and into the new year. There will also be further visuals launched soon taken from the project.

Taken from the Wrath of Zeus Mixtape in 2012, hosted by DJ Clockwork, check out “Chicken Soup for tha Soul”

Keep up to date with Buggs on twitter @BuggsThaRocka

Any further media and press enquiries regarding Buggs tha Rocka, requests for interviews or any other information can be sent to UrbanElite PR HERE