NY state producer Frost Gamble, now a resident of Winnipeg Canada, has become one of the fastest emerging names in the game over the past year.

Having signed with Miami’s 22 Entertainment when his track “Honey” with Detroit rapper ZotheJerk was picked up for the label’s “God Bless Dope Rappers” compilation early in 2016, the release of his “Veteran” EP with long time associate Tone Chop in November 2016 kick started a significant escalation in his career.

In May 2017, he released the album “Black Beach” with ZotheJerk which enjoyed international media coverage and included featuring in the renowned MOJO Magazine. In September he released the album “Respect Is Earned Not Given” with Tone Chop, again receiving worldwide critical acclaim and on October 20th releases another collaborative project, this time the “Rare Fabric” EP with Tragedy Khadafi.

Meantime, he has been working on remix and new music projects with Royce da 5’9″ and Horseshoe Gang, and in early 2018 will release his new solo album “I Missed My Bus” which includes stellar featured artists including Crooked I, Rah Digga, Conway, Planet Asia, Ruste Juxx, Skyzoo, Ras Kass, Guilty Simpson and more.

So what’s behind the story here? Two US publications got in touch with the man to find out.

In the resultant in depth interview feature, they discuss last year’s “Veteran” EP, the new album “Respect Is Earned Not Given” and the history with Chop which goes back to their time in Binghamton during the 90’s, rap battle rivals who became partners in tagging and developed a brother-like relationship which has survived to this day.

Frost outlines his recording and production techniques, his connections with the featured artists including Kool G Rap, and previews what to expect from the EP with Tragedy Khadafi. He talks about the nature of the working relationship with 22 Entertainment and how this has helped him progress as an artist, and finishes by explaining how he handles the increase on workload and demands of his time while sharing his future aspirations. 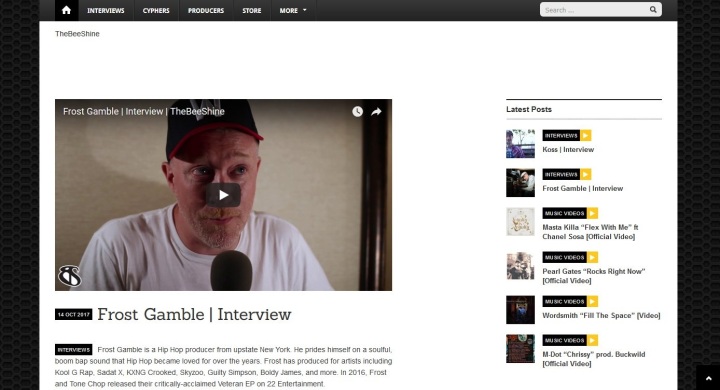 While in NYC during August to complete the new EP with Tragedy Khadafi, Frost linked up with The Beeshine TV.

In the resultant video interview, Frost discusses his journey through hip hop, initially as a b-boy, then an MC and ultimately as a crate digging beatmaker, and reveals what his main aim is now in the context of what the culture has given to him through the years.

“Respect Is Earned Not Given” is available from Amazon, iTunes and Bandcamp

All media, press and radio show enquiries regarding Frost Gamble, including requests for interviews, can be sent to us at UrbanElite PR. Our contact information details are available HERE