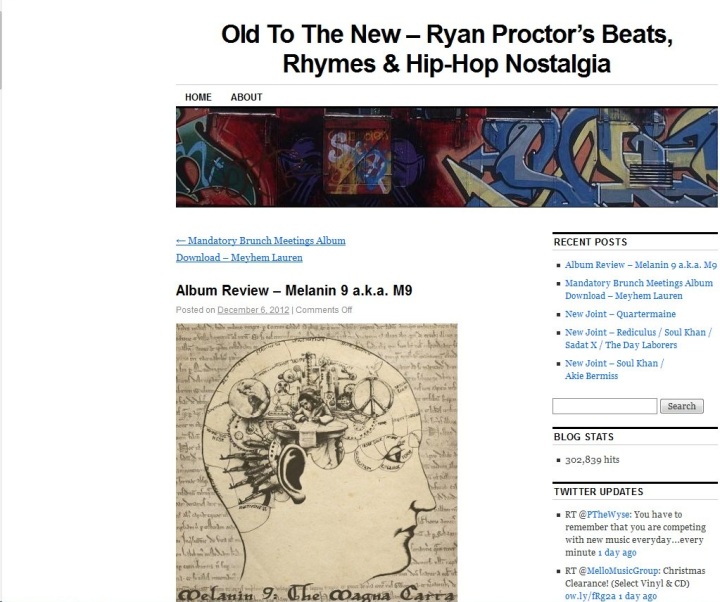 “Proving that it is possible to deliver street-influenced, hardcore Hip-Hop without having to appeal to the lowest common denominator, with “Magna Carta” M9 has succeeded in his mission to elevate, stimulate and edutain, delivering one of 2012′s most essential albums in the process.” is how Ryan Proctor summarizes the new album from London’s Melanin 9 for his online blog Old To The New

Ryan has been writing about hip hop for several magazines over the years, contributing reviews, interviews and news, and has established a real tastemaker online platform with his blog, covering some of the best traditional hip hop international releases, videos, singles, albums and events

If in any doubt about his standpoint on hip hop & rap music today, his opening line about Melanin 9’s album and his overall view are combined with :

“Although there may be many artists today prepared to sell their soul and dumb down their content in an attempt to appeal to the masses and achieve their fifteen minutes of fame, there are still real emcees out there who aren’t willing to take the easy route, choosing instead to put hours of effort into mastering their craft, keeping their lyrical swords sharp as they walk in the footsteps of the greats that came before them. London-based lyricist Melanin 9 a.k.a. M9 is one such artist.”

The strength of the classic Tru Skool sound influenced by the Golden Era of the 1990’s is reflected by the international element of his album sales on iTunes throughout Europe and in the States, as well of course as in the UK. This would indicate that the genre is in good health, and still passes the test of time when others come & go.

You can buy the album on iTunes digital store HERE or if you prefer purchasing the CD format by mail order, or the limited edition 12″ vinyl of the single “White Russian” featuring Roc Marciano, go to http://m9ether.bandcamp.com

All international coverage on this release has been handled by UrbanElite PR, and any further media enquiries can be sent HERE