The magazine, who will also include the album in their Top 50 releases of 2012, introduces the feature “Melanin 9 is a true UK hip-hop talent….and the LP tackles real issues such as human rights, social cohesion and self worth”

Meanwhile, Stateside online magazine Surviving The Golden Age has reviewed the album, again picking up on the strong influence of the Golden Era of 90’s hip hop contained within the release.

Comparing his “raw, hard hitting hip hop beats” to that found on Nas’ “Illmatic” (not the first time the comparison has been made), and like Nas & Biggie “his lyrical content deals with his city….North London” the magazine cites the track “Heartless Island” and credits Melanin 9 as “a highly literate rapper as he references House of Flying Daggers in the same breath as soliloquies”

There has been extensive international media coverage on this release, with more on the way, and once you check out the album stream on Bonafide you’ll hear why

You can buy the album on iTunes now HERE

You can also purchase the CD physical format direct by mail order from http://m9ether.bandcamp.com

All press, radio and other media promotions has been handled by UrbanElite PR, and any other enquiries regarding the release can be sent HERE

“Proving that it is possible to deliver street-influenced, hardcore Hip-Hop without having to appeal to the lowest common denominator, with “Magna Carta” M9 has succeeded in his mission to elevate, stimulate and edutain, delivering one of 2012′s most essential albums in the process.” is how Ryan Proctor summarizes the new album from London’s Melanin 9 for his online blog Old To The New

Ryan has been writing about hip hop for several magazines over the years, contributing reviews, interviews and news, and has established a real tastemaker online platform with his blog, covering some of the best traditional hip hop international releases, videos, singles, albums and events

If in any doubt about his standpoint on hip hop & rap music today, his opening line about Melanin 9’s album and his overall view are combined with :

“Although there may be many artists today prepared to sell their soul and dumb down their content in an attempt to appeal to the masses and achieve their fifteen minutes of fame, there are still real emcees out there who aren’t willing to take the easy route, choosing instead to put hours of effort into mastering their craft, keeping their lyrical swords sharp as they walk in the footsteps of the greats that came before them. London-based lyricist Melanin 9 a.k.a. M9 is one such artist.”

The strength of the classic Tru Skool sound influenced by the Golden Era of the 1990’s is reflected by the international element of his album sales on iTunes throughout Europe and in the States, as well of course as in the UK. This would indicate that the genre is in good health, and still passes the test of time when others come & go.

You can buy the album on iTunes digital store HERE or if you prefer purchasing the CD format by mail order, or the limited edition 12″ vinyl of the single “White Russian” featuring Roc Marciano, go to http://m9ether.bandcamp.com

All international coverage on this release has been handled by UrbanElite PR, and any further media enquiries can be sent HERE

Contributor Thomas May gives this a thorough examination, and a 4 star rating, opening with :

“On this record, Melanin 9 remains admirably committed to his belief in the potency of hip hop as a socially transformative art form”

Of course as an artist, Melanin 9 is heavily influenced by the ethos of hip hop during the Golden Era, although in this album applies a contemporary take for 2012, a point picked up by the magazine when they say “it is the lyrical dexterity and poise of delivery with which Melanin 9 presents his sentiment that elevates this record beyond mere social critique.”

His lyricism and wordplay have been his trademark since the days of his mixtapes “High Fidelity” and “144,000”, and as debut albums go, to quote MusicOMH is one which is “made only more striking by the knowledge that this is the artist’s debut“. With the ongoing throwback to the 90’s scene happening in the United States right now, it’s little surprise that Melanin 9 has been enjoying such a level of media attention internationally.

You can read the whole review HERE

The album can be bought digitally on iTunes HERE

You can also buy the physical CD format of the album via http://m9ether.bandcamp.com where you can also purchase the 12″ vinyl version of his single “White Russian” featuring Roc Marciano

On twitter, you can reach him @Melanin_9 and the magazine @MusicOMH

Look out for much more international media coverage on this release in the weeks ahead. Any further press enquiries can be sent to UrbanElite PR HERE 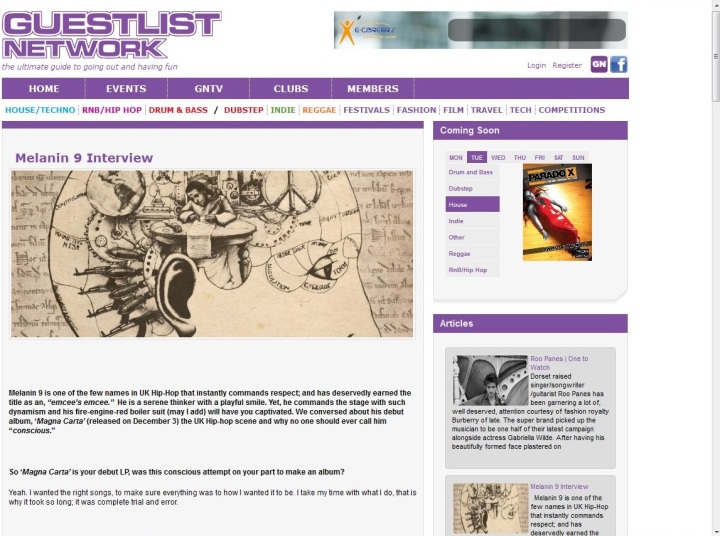 London’s monthly music newspaper and online platform The Guestlist Network had already given Melanin 9’s new release “Magna Carta” their full endorsement by naming it their “Album of the Month” at the beginning of November.

He speaks on his new album and how it was put together, the universal nature of hip hop culture compared to the more insular outlook of others, his thoughts on the Golden Era and the influence that has played in his writing style and his earlier days coming up through the scene

The album was released on iTunes on 3rd December, and you can buy that HERE

If you prefer physical CD copies and the 12″ vinyl of his single featuring Roc Marciano “White Russian”, these can be purchased via http://m9ether.bandcamp.com

The Find Magazine is an international publication contributed to by music lovers all over the world interested in hip hop, jazz, funk & soul, like crate digging journalists looking for that real traditional sound, and reporting on it wherever on the planet it happens to be.

One such contributor is Melbourne based writer Mladen Luketin, the latest to give Melanin 9’s new album Magna Carta (out 3rd December) the once over.

There’s been links between the British and Australian hip hop scenes for many years, so between that and the focus of the magazine, its no surprise that the album is well received.

Melanin 9 draws many of his influences from the Golden Era of hip hop, but in this album has also mixed the game up with some experimental contemporary sounds which is a large part of the reason he’s had such a huge range of media interest, combined with his skilled lyricism, wordplay and subject matter

CD versions of the album are available now and can be bought by mail order via http://m9ether.bandcamp.com as can the 12″ vinyl of his single “White Russian” featuring Roc Marciano

Look out for much more media coverage in the weeks ahead from the UK, Europe and United States. Any further media, press or radio enquiries about the release can be addressed to UrbanElite PR HERE

If youre into all things hip hop, and we assume you probably are, you should definitely check out the UK’s online magazine Broken Culture

They have a really wide level of coverage including music, events, art & graff, skate & bmx and much more. The owner Max Quinn has done an excellent job in representing the culture and you can easily tell that “the knowledge” is there given the in depth analysis provided.

They’re the latest to cover Melanin 9’s new album Magna Carta which releases on 3rd December. The feature covers the launch event last Friday at London’s Vibe Bar, provides some extra background information and history on the artist, you can also watch several of his videos and of course read a thorough review of the album itself.

It’s a really well presented piece of journalistic writing, and you can read it HERE

The CD version of the album can be bought direct from http://m9ether.bandcamp.com and the album will also be available to buy digitally. Note that you can also buy the vinyl 12″ of his highly successful single White Russian featuring Roc Marciano, so again if you contact his Bandcamp you can cop that heat there

There will be a lot more coverage on this release coming over the next few weeks, including special video features, and an exclusive snippet stream of the entire album via Bonafide Magazine shortly.

Any magazines, press, media or djs looking for more information about the release should contact UrbanElite Promotions HERE 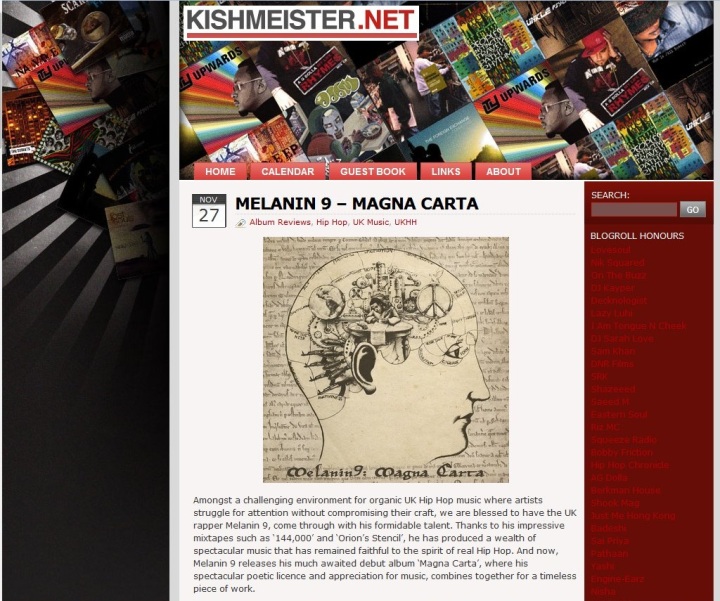 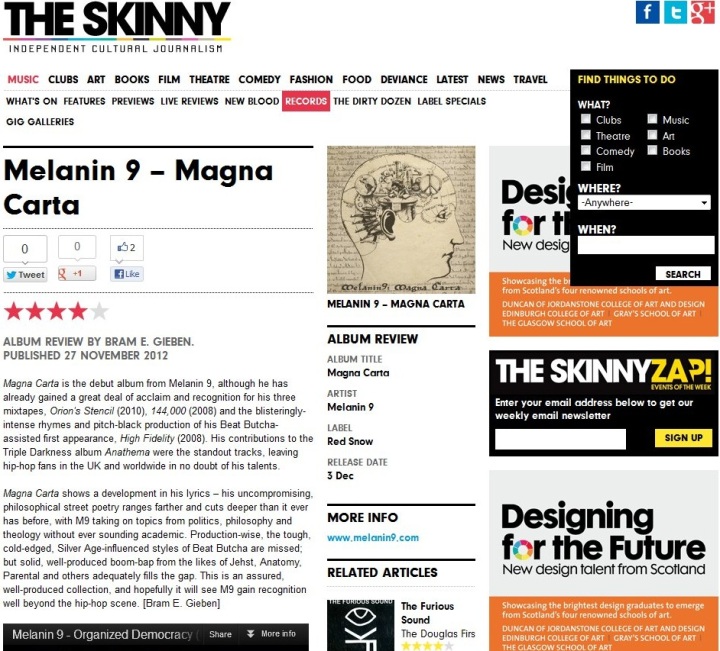 With the recent release of his video “White Russian” ft Roc Marciano and packed launch event at The Vibe Bar last Friday under his belt, the album featured this week in MOJO Magazine, and three more publications have just gone live with their coverage

London’s Blatantly Blunt cover a wide range of genres including hip hop, rap, and grime, Kishmeister has been supporting the local hip hop scene for some considerable time now and Edinburgh’s The Skinny is a multi genre magazine with both a physical publication and online presence.

Read the reviews below

The Skinny (you can also buy in stores now) READ

All media, press & radio dj enquiries about this release can be addressed to UrbanElite PR HERE