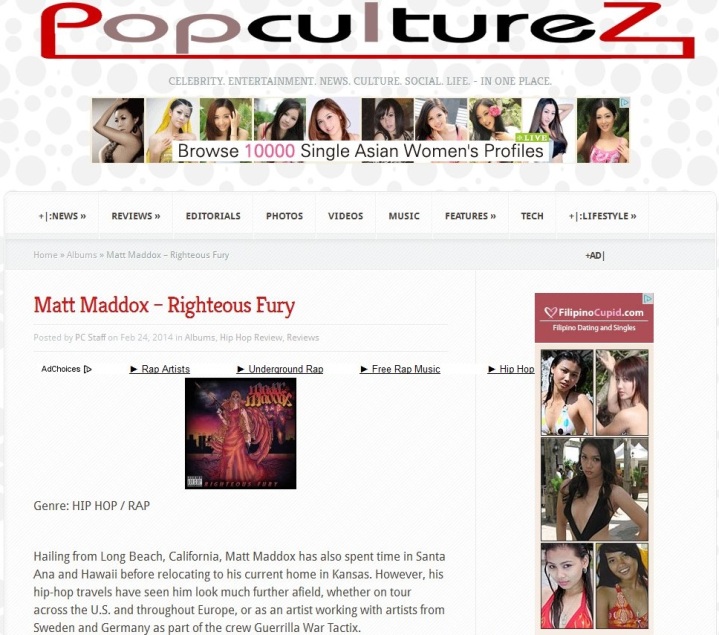 Originally out of Long Beach California and currently resident in Kansas, the rapper has put several years’ work into this his sophomore release, and it includes all the key qualities of an authentic hip hop album – skilled lyricism and wordplay, quality beats and turntablism, and a well chosen selection of special guest features

UK online magazine PopCulturez are the latest to give their full endorsement in this new review published today. “Lyrically thick, this album takes things right back to hardcore rhyme spitting such as on the superb, uncompromising, ‘Murder Weapons.” as the magazine goes into further detail of the east meets west influence throughout, concluding “Without playing to the commercial galleries, this album hits hard with no filler, clocking in at 57 minutes to deliver a lean and mean collection“.

The album is in digital and physical CD formats, available from a wide range of online stores including Amazon, UGHH.com, iTunes, CD Universe, Virgin Media and many more.

You can catch Matt Maddox on tour with Reef the Lost Cauze and Adlib over the next couple of weeks at venues in Virginia, North Carolina, South Carolina, Chicago and Wisconsin. Check in with him on twitter @MattMaddox82 to keep up to date with what’s happening. You can also check in with the magazine @PopCulturez

Any press and new media requests for promotional copies of the album to review, or to interview Matt Maddox can be forwarded to UrbanElite PR HERE 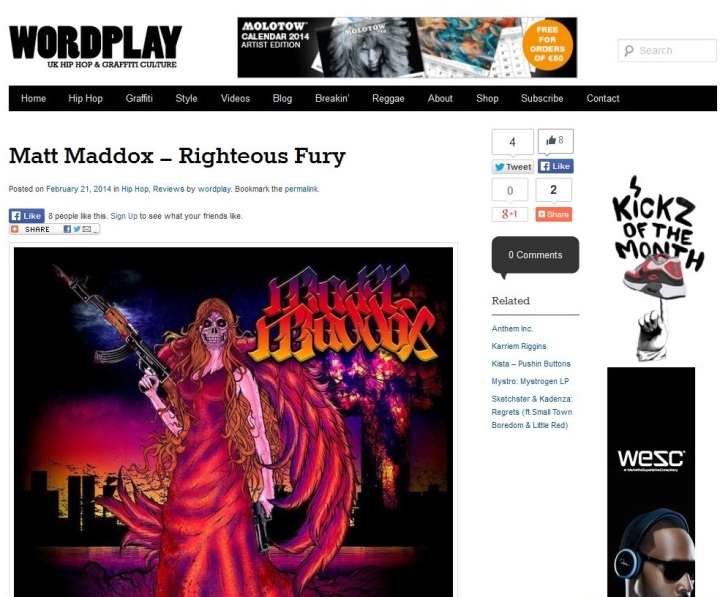 Wordplay Magazine is one of the UK’s leading online & physical publications covering the various traditional elements and culture of hip hop, with news, review and feature coverage of music, graffiti, breakin, fashions and everything else in between

Writer Craig Palmer affords the release a 4 star rating, recommending it to fans of Army of the Pharaohs, La Coka Nostra and Snowgoons for the powerful and intelligent delivery of Maddox’ lyricism, backed by high quality production & turntablism from the likes of C Lance, Skammadix, Sicknature, Nemesis, Vanderslice & DJ TMB. Add into the mix features from Tragedy Khadafi, Reef the Lost Cauze, King Magnetic, Adlib and other assembled cast members, it results in a potent release for all who appreciate the authentic hip hop sound

Their review, which includes videos for the releases BARbarians (ft UG, Godilla & Born Unique) & No Country For Old Men, and the audio streams for Street Art ft Tragedy Khadafi and King Killer produced by Sicknature, can be read HERE

The MC, originally from southern California but now resident in America’s MidWest has just launched a video trailer for the album. It features the joint “The Get Back” with King Magnetic

It can be pre-ordered on iTunes at http://georiot.co/3ILt

Currently on tour with Reef the Lost Cauze and Adlib performing at venues in Philadelphia, New York, New Jersey, Virginia, North & South Carolina, Chicago and Wisconsin, you can keep up to date with him on twitter @MattMaddox82 and the magazine @Wordplaymag

Look out for much more international media coverage on this release in the next few weeks, and also for a brand new single being launched to the internet in the next few days. Any members of the press who would like promotional copies of the album to review, or to request interviews with Matt Maddox, can contact UrbanElite PR HERE

It’s been a long time in the making but has enjoyed an impressive international media response, reflecting the skilled wordplay and powerful delivery of the Kansas based MC. The ex Guerilla War Tactix member has called on some well known names in the world of hip hop to join him on the album.

Producers including Nemesis, Skammadix, C Lance (Jedi Mind Tricks), Sicknature (Snowgoons), and Vanderslice have provided some neck breakin beats over which Maddox and featured artists such as Tragedy Khadafi, Reef the Lost Cauze, King Magnetic, Adlib and Burke the Jurke have delivered the lyrical fire. A healthy dose of quality turntablism is in effect throughout courtesy of fellow Red Phone labelmate DJ TMB.

He has just launched the video trailer for the album on Youtube, and the soundtrack used is the track “The Get Back” ft King Magnetic. Check it out

The album will be available in digital and physical formats, and can be pre-ordered in the following ways:

He is also currently on tour with Reef the Lost Cauze and Adlib. Catch them at any of these venues in the next couple of weeks:

Look out for a lot more international media coverage in the next few weeks and also the launch of a new single next week. Keep up to date with his release and tour news over at twitter @MattMaddox82 and check in with his label partners @RedPhoneRecords & @Seven13Music

All true hip hop heads need to mark this one in the calendar : 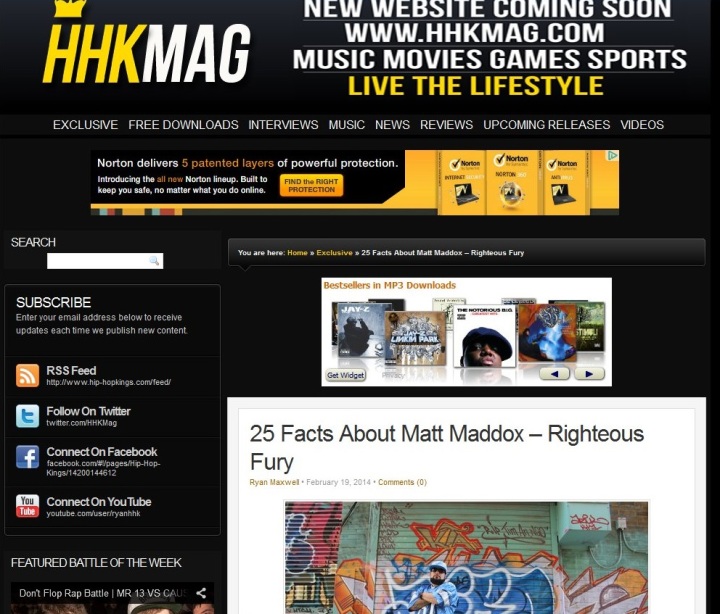 With the new album “Righteous Fury” about to release next week on 25th February, the UK online HHK Magazine which specializes in hip hop spoke with rapper Matt Maddox about “25 Facts” relating to the new release previously unknown.

It’s an interesting regular feature the magazine runs, and in this we get an insight to events surrounding the planning and recording of the album as well as other tour stories and a behind the scenes snapshot of life as an independent artist

Read it all HERE

Matt Maddox starts his tour with Reef the Lost Cauze and Adlib today and they will be performing a venues in Philadelphia, New York, New Jersey, Virginia, North & South Carolina, Chicago & Wisconsin over the next couple of weeks. Here’s the full list :

The album releases next week on Tuesday 25th February, and can be pre-ordered on iTunes at http://georiot.co/3ILt

The full tracklisting is

Look out for much more media coverage coming over the next few weeks from publications in the UK, Europe & United States, but any members of the press looking for promotional copies of the album to review, or wishing to request an interview with Matt Maddox or who would like to attend any of the listed shows, should contact UrbanElite PR HERE

Meanwhile, keep up to date with what Matt’s going on via his official twitter account @MattMaddox82 You can also reach his label representatives on twitter @RedPhoneRecords & @Seven13Music You can also check in with the magazine over at @HHKMag 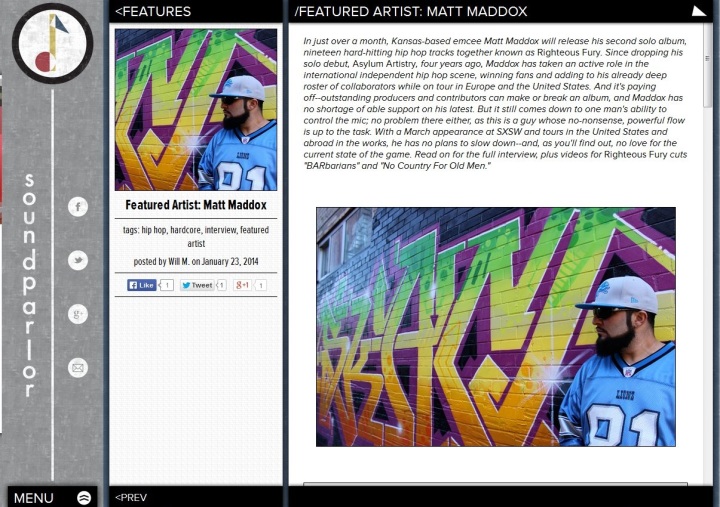 As Soundparlor’s featured artist in their “10” series, he spoke on his background in Southern California, the early musical influences, life as an independent artist and future plans.

You can read that in full HERE 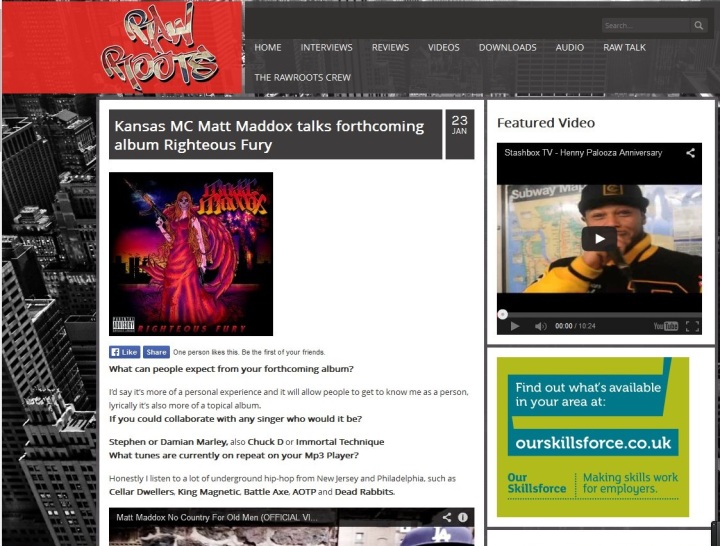 He spoke with UK hip hop online Rawroots about his new album Righteous Fury, his desire to work in future with Immortal Technique, Chuck D & Damian Marley, his love of underground hip hop from Philly and New Jersey, and his immediate tour plans

The full interview is HERE

As well as a scheduled appearance at SXSW and a tour with Slaughterhouse, he has recently announced a series of dates in the States with Reef the Lost Cauze & Adlib taking in New York, New Jersey, the DMV, Chicago and the mid west. Here is the full list :

Further dates in Canada are due to be announced shortly

19 hip hop bangers with a running time of 57 minutes which can be pre-ordered on iTunes at http://georiot.co/3ILt

Look out for much more press coverage on this release in the weeks ahead. Any media requiring promotional copies of the album for review, or who wish to interview Matt Maddox, can contact UrbanElite PR HERE

Meanwhile, check out the two singles released from the album recently:

King Killer produced by Sicknature from the Snowgoons