The follow up to his EP “F.Y.L.P.M.” released earlier in the year, the album is produced entirely by the UK’s Agor and features Westside Gunn and Hus Kingpin.

Distributed by Sony’s “The Orchard”, it is available to buy on CD and digital formats from multiple stores worldwide including Amazon, Bandcamp, iTunes and Spotify

YOU CAN ALSO HEAR THE ALBUM STREAM ON SOUNDCLOUD

All international media and press enquiries regarding Da Flyy Hooligan and the album “S.C.U.M.” can be sent to us at UrbanElite PR. All our contact information details are available HERE 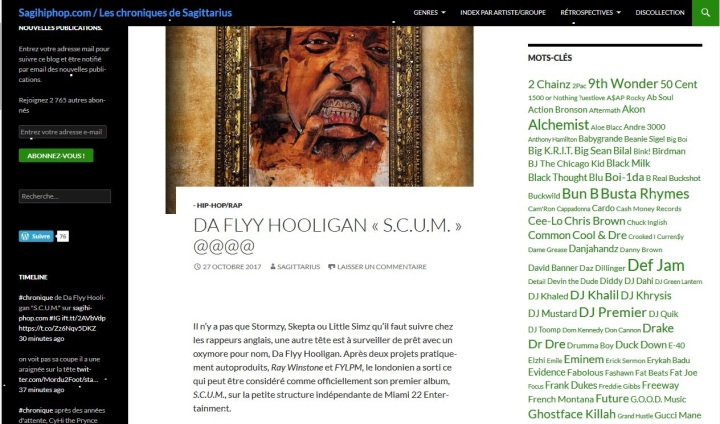 One of the most creative and gifted lyricists to emerge from London’s burgeoning rap scene, Da Flyy Hooligan released his new album “S.C.U.M.” on October 27th.

In a rare step for a British hip hop artist, he signed with a US label in the shape of 22 Entertainment for the release which also includes guest featured artists Westside Gunn and Hus Kingpin.

“S.C.U.M.” is available to buy on both CD and digital formats from multiple online stores worldwide including Amazon, Bandcamp, iTunes and Spotify

French online magazine “Sagi Hip Hop” has just published a new 4 star review reflecting the quality of the production by Agor, compared in style to The Alchemist, and the fierce rhyme skills of Harlesden’s finest.

READ THE ARTICLE IN FULL, WITH ENGLISH TRANSLATION AVAILABLE, HERE

He also gave his first interview in two years recently, speaking about his career, artistic and album concepts, and described in detail his long standing bond with the late Sean Price.

The album stream is also available to hear on Soundcloud

All international media, press and radio station enquiries regarding Da Flyy Hooligan and his new album “S.C.U.M.” can be sent to us at UrbanElite PR. Our contact information details are available HERE

Long considered as one of the most creative and gifted lyricists at the forefront of the UK’s burgeoning rap scene, he also spent time in NYC where early comparisons dubbed him “the new Slick Rick” while working with the late Sean Price, Sav Killz, Prince Po and Dead Prez.

Featuring Westside Gunn and Hus Kingpin, “S.C.U.M.” is produced entirely by one of England’s hottest new emerging names Agor, his sophisticated and lavish soundscapes providing the perfect backdrop for charismatic portrayals of an irrepressible underclass. Stylish and compelling, a series of bold, satirical and uncomprimising rhymes intelligently depict contemporary aspirations, and reaffirms his international reputation as a serious force in rap’s new wave.

The album is available on CD and digital formats from multiple onlines stores worldwide including Amazon, iTunes and Spotify

All internation press, media and radio station DJ inquiries and requests regarding Da Flyy Hooligan and the new album “S.C.U.M.” can be sent to us at UrbanElite PR. Our contact information details are available HERE

Harlesden’s Da Flyy Hooligan has been at the forefront of the burgeoning UK rap scene for a number of years and has been long regarded as one of England’s most gifted and creative lyricists.

He also spent some time based in NYC and has worked with the calibre of Sav Killz, Hasan Salaam, Prince Po, DV Alias Khryst, Dead Prez, the late Sean Price.

In a rare step for a British rap artist, he has signed with a US label for the release of his new album “S.C.U.M.” in the shape of Miami’s 22 Entertainment. Out on Friday 27th October, guest featured artists include current Stateside luminaries Westside Gunn and Hus Kigpin.

The album is available to pre-order in physical and digital formats from various online stores including Amazon, iTunes and Bandcamp

From the album he has released the singles “Savile Row” & “Distress Signals” plus an official video for the track “Asantihini”. Earlier this week he also released the video “Velvet Cake” lifted off his EP “F.Y.L.P.M.” released earlier in the summer.

All media, press & radio station DJ inquiries regarding Da Flyy Hooligan and the album “S.C.U.M” can be directed to us at UrbanElite PR. Our contact information is available HERE

Produced by NCL TM, the beat blasts out a cacophony of brass and soul samples over which DFH gets creative delivering trademark dexterous wordplay and high calibre rhyme schemes. On the track title he simply states “When you’ve had the best red velvet cake from Lords Bakery in Flatbush, Brooklyn, you’ll understand why I named this jawn – definitions of deliciousness“.

Directed by The Ol’ Cyruss in London, the theme of the video is an ode to Ghostface Killah’s “Supreme Clientele” album cover, employing imagery as a pastiche of retro cinema and film noir. Watch it now on Youtube

All international press, media and radio station DJ inquiries regarding Da Flyy Hooligan and the album “S.C.U.M.” can be directed to us here at UrbanElite PR. Our contact information details are available HERE

The track adapts a concept from his African heritage, the word meaning “Ruler” of the Ashanti people of Ghana metaphorically applied to his own prowess on the mic through superior lyricism aand extravagant vocabulary.

Long established as one of the most gifted and creative artists in the burgeoning British rap scene, previous releases have included collaborations with further US luminaries including the late Sean Price, Prince Po, Dead Prez and Hasan Salaam.

Pre-order “S.C.U.M.” on Bandcamp and iTunes

All international media & press enquiries regarding Da Flyy Hooligan and the album “S.C.U.M.” can be sent to us at UrbanElite PR. Our contact details are available HERE

Long regarded as one of the UK’s most gifted and creative lyricists, his bullish rhymes are fuelled by Agor’s lavish guitar driven production. The newly shot visuals are equally as impressive, filmed and co:directed on location by DFH and Ringz ov Saturn, with further drone sequences choreographed by Subtle Satori.

The video was premiered by COMPLEX MAGAZINE

In an extremely rare occurrence for a British rap artist, DFH has signed with a US label, 22 Entertainment, for the release his new album “S.C.U.M.”. Out on October 28th 2017 and produced entirely by Agor, it includes features by Westide Gunn and Hus Kingpin.

The label, whose back catalogue includes Royce da 5’9″, Joe Budden, Fashawn, Stat Quo, Crooked I, and J-Kwon, are distributed worldwide by Sony’s The Orchard, and the new album will be available in both digital and physical formats.

Connect with the artist and label on social media

All international media, press and radio station DJ eqnuiries regarding Da Flyy Hooligan and the new album “S.C.U.M.” can be sent to us at UrbanElite PR, our contact information is available HERE

The latest Rapture & Verse monthly column written by Matt Oliver has just been published in the UK’s Monolith Cocktail.

The column serves as a regular update of all hip hop and rap music news from around the world, album, EP, mixtape and single releases, events, videos, and the latest breaking news about artists from both sides of the Atlantic.

Also mentioned in honourable despatches is the new album “S.C.U.M.” by north west rapper Da Flyy Hooligan, produced by the UK’s Agor and including features by Westside Gunn and Hus Kingpin. Out on October 28th through US label 22 Entertainment whose back catalogues includes Royce da 5’9″, Fashawn, J-Kwon, Joe Budden, Bumpy Knuckles, KXNG Crooked, it will be available in CD and digital formats distributed by The Orchard

READ THE COLUMN IN FULL HERE

Connect with the label and artist on social media

All international media & press enquiries regarding the new album “S.C.U.M.” can be sent to us at UrbanElite PR. Our contact information is available HERE 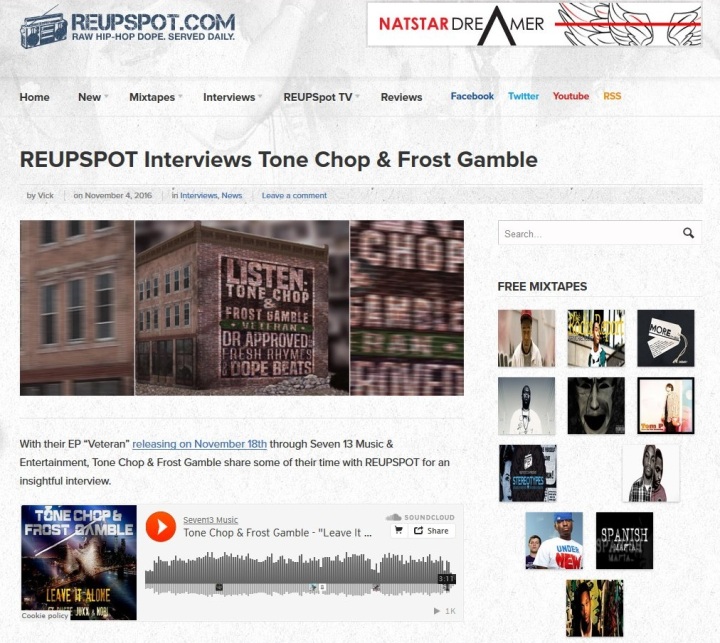 Originally rivals in upstate NY’s rap battle scene during the 90’s, they became partners in rhyme, tagging and production. Already on record as crediting the wider hip hop culture and elements as being the catalyst for them to pick up the mic, US online The ReUp Spot sat down with them recently for their perspective on the evolution of hip hop over the past two decades.

The feature is an insightful historical record, as the pair discuss their own involvement in music, graffiti and breakdancing at a time when by comparison to today, the elements had a more prominent and influential role in the wider culture.

Subjects addressed act as a historical snapshot of the changes which have taken place. The switch from vinyl to Serato, the elevation of hip hop music, fashions and art elevated from the underground to the broader commercial world, and the emergence of the various sub genres which now exist.

Focusing on the new release, they discuss the reasons for collaborating officially for the first time after all these years, their previous solo releases and the impact of signing with Seven 13.

The article will likely be of extra interest to a younger generation, typically fed a very narrow representation by today’s media. There is more to it than that – go to the source, adapt and progress. “If you know whence you came, there are absolutely no limitations to where you can go” James Baldwin

The first single from the EP released was “Leave It Alone”, a tribute to Sean Price featuring Ruste Juxx and Nobi. Check out the stream

All media, press and radio station DJ inquiries regarding the “Veteran” EP release can be sent to us at UrbanElite PR. All our contact information is HERE

With just under a month until the release of their new album “Anti-Trap Music” on April 29th, west coast crew Horseshoe Gang jumped on the phone with the UK’s Wordplay Magazine.

The magazine covers all things rooted in hip hop culture – music, fashion, graffiti – and produce a regular printed publication in addition to having their online platform.

Speaking with Ethan Everton, the group discuss the upcoming album release and the subject matter they touch upon and provide further insight as to why only their elder brother KXNG Crooked appears as a guest artist.

The feature which also doubles as a focus piece on the release also reports on Horseshoe Gang’s rap battle with Funk Volume last year, their previous EP release “Knockin on Rap’s Door” and the interview concludes with their thoughts on the level of unity between artists in the California scene.

In the past few weeks, the group have been busy speaking with local, national and international publications and have more ahead. Their most recent single release was “Shoe-icide Squad” addressing the issues surrounding police brutality and killings of young men in the black community. Check the stream of this contemporary G Funk banger

“Anti-Trap Music” can be pre-ordered on iTUNES and you can connect with Horseshoe Gang on social media, whether on TWITTER or FACEBOOK

All international media, press and radio station dj enquiries about Horseshoe Gang and the album “Anti-Trap Music” can be sent to us at UrbanElite PR, contact details HERE