The pair discussed the earliest days together growing up in NY state which included a period as rap battle rivals, and their earliest influences, citing names such as Diamond D, Lord Finesse, Pete Rock, LL Cool J and The Beatnuts as helping shape their initial approach.

They then speak about the concept behind their new album “Respect Is Earned Not Given” and Chop provides an insight into the working relationship with featured artists Kool G Rap and DNA. The subject then moves on to the comparisons between the classic style of hip hop with some of today’s contemporary mainstream offshoots, the differentials in marketplaces and focus on lyical content, as Chop declares his wish for “mumble rap” to be re-categorized seperately from the genre!

Chop is then asked to give his thoughts on Jay-Z’s new album “4:44”, and as a fan of Hova he gives an interesting view of his overall body of work since the release of “Reasonable Doubt”. Meanwhile, as the pair discuss the logistics of recording together, Frost explains his move from traditional to contemporary crate digging techniques using the MPC, S900 and Tempest as part of the production process.

LISTEN BACK TO THE INTERVIEW IN FULL – STREAMING OPTIONS HERE

Music played during the show included Chop & Frost’s single “Leave It Alone” ft Ruste Juxx, a tribute to Sean P taken from their previous “Veteran” EP, and the current single “Walk the Walk” ft Kool G Rap. Listen to the streams on Soundcloud

Out on September 29th through 22 Entertainment, “Respect Is Earned Not Given” also features Planet Asia, Tragedy Khadafi and White Rhino, and is available to pre-order on iTunes and Bandcamp

All international press and media enquiries regarding Tone Chop & Frost Gamble, including DJ requests for full quality mp3s of “Leave It Alone” and “Walk the Walk” can be sent to us at UrbanElite PR. Our contact details are available HERE

In the interview feature published today, they discuss how the pair first met at rap battles in upstate New York during the 90’s and how they managed to remain in sync through the years despite Frost’s relocation to Canada.

They give their thoughts on the evolution of hip hop through the past couple of decades and outline how their own solo careers progressed through that time before coming full circle to discuss the new EP and their future plans for an album in 2017.

Released through Seven 13 Music & Entertainment on November 18th, the Veteran EP can be bought from iTunes

Included in the EP is the single “Leave It Alone” featuring Ruste Juxx and Nobi, a tribute track to the late Sean Price

Look out for a new bonus cut “Crowd Pleaser” launching next week, and meantime connect with Tone Chop & Frost Gamble on social media :

All media, press and radio Dj inquiries regarding Tone Chop & Frost Gamble can be sent to us at UrbanElite PR, our contact information is HERE

The “Veteran” EP is available on iTunes and the latest review comes courtesy of Stuart Sharpe for his personal blog “Sharpes Reviews”. The site publishes regular updates and in the past couple of months has included appraisals of releases by Danny Bown, Joe Budden, The Game and Termanology

Summarising “Both Tone Chop and Frost Gamble show a lot of skill as well as potential, and should continue to grow as individuals and a group.” the full review can be read HERE

Including the single “Leave It Alone”, a tribute to the late Sean Price featuring Ruste Juxx, you can listen to the full Veteran EP stream on Soundcloud

Look out for more international media & press coverage of the release in the weeks ahead, and a further special bonus cut due for launch during December. All media and radio station DJ inquiries about Tone Chop & Frost Gamble can be sent to us at UrbanElite PR, our contact information is HERE

Meanwhile, connect with the duo and label online 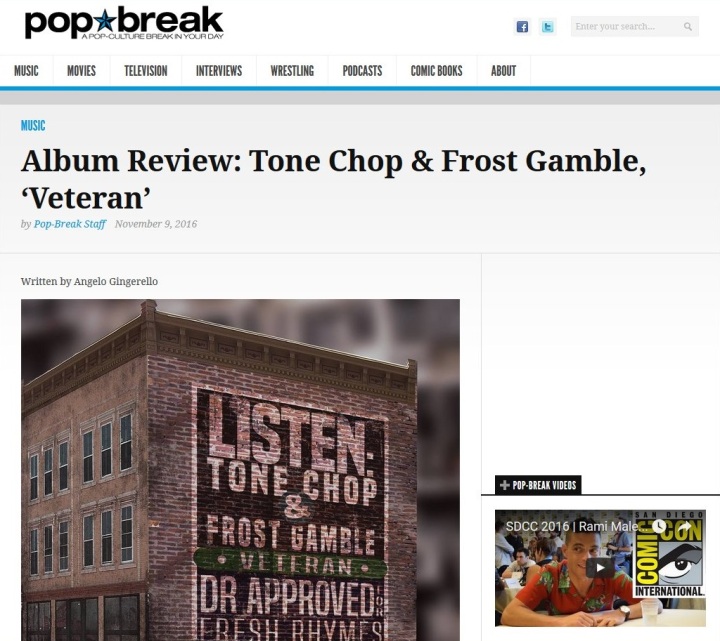 Meanwhile back in upstate NY, rapper and producer Chop released an extensive series of mixtapes whether solo or as part of the group Binghamton’s Most Wanted. He also supplied the beat for Tom Gist’s “Momma”

Contributor Angelo Gingerello has just run the rule over it for online magazine Pop Break, and you can read his in-depth review which affords the EP an 8/10 rating HERE

From the EP, they have already released two singles. “Leave It Alone” featuring Ruste Juxx and Nobi is a tribute to the late Sean Price, while only this week they launched their first official video for “Step Up”. Check them out

Keep up to date with the pair on social media:

All international media, press and radio station DJ inquiries regarding Tone Chop & Frost Gamble can be sent to us at UrbanElite PR. Our contact information is available HERE

US online hip hop magazine The 9 Elements have run their interview series “The Whole 9” for some time now where they get a snapshot of the artist’s mindset and the concept behind their upcoming release.

The latest focus is on NY State rapper Tone Chop and Winnipeg based producer Frost Gamble, long term associates and originally rap battle rivals who have collaborated for their first official release via the “Veteran” EP, out November 18th through Seven 13 Music & Entertainment.

The interview discusses the new project and in particular the first single to be released “Leave It Alone” which features Ruste Juxx and is a tribute to the late Sean Price. Frost’s move to Canada and switch away from the mic to concentrate solely on beatmaking is also addressed as is the duo’s thoughts on the influence of the 90’s sound in many contemporary releases.

READ ALL THIS AND MORE IN THE ARTICLE PUBLISHED HERE

All press, media and radio station inquiries regarding Tone Chop & Frost Gamble can be sent to us at UrbanElite PR. All our contact information is HERE

The UK’s HHK Magazine (aka Hip Hop Kings) has been running a popular “25 Facts” series for the past few years where artists provide exclusive and previously unknown information about themselves and their upcoming new release.

Latest in the series is a focus on NY State rapper Tone Chop and Winnipeg producer Frost Gamble who, despite having been rap battle rivals in the 90’s and subsequent partners in rhyme & tagging, release their first collaborative project on November 18th.

In the feature they reveal how they came by their artist names, the recording process of the EP, their most rated producers and Emcees and their involvement in the rap battle and graffiti scenes.

From the EP, and available to buy now from iTunes, is their first single “Leave It Alone”. A tribute to the late Sean Price, it features Ruste Juxx and Nobi.

They followed that with a bonus cut “Being A Boss” which uses the Jadakiss and Nate Dogg joint “Time’s Up” for the hook, and is available to download free direct from the audio stream on Soundcloud.

Look out for extensive international media coverage on the release in the weeks ahead.

All press & media inquiries regarding Tone Chop, Frost Gamble and the Veteran EP, including requests to interview the artists or DJ requests for mp3s of their joints can be sent to us at UrbanElite PR. Our contact information is HERE

Available to pre-order on ITUNES, the 7 tracks are the product of two artists who began as rap battle rivals in upstate NY before becoming partners in rhyme and tagging. Frost’s subsequent move to Canada saw the pair pursue solo careers, Chop releasing a whole series of mixtapes including collaborations with Tom Gist, St Laz and Jinx Da Juvy.

The first single from the EP “Leave It Alone” featuring Ruste Juxx & Nobi is their tribute to the late Sean Price, while the recent bonus cut “Being A Boss” splices up the Jadakiss & Nate Dogg joint “Time’s Up” for the hook. Check them out

Look out for more international media coverage on the EP release and a new video releasing next week. Meantime keep up to date with Tone Chop & Frost Gamble on social media :

All media and press inquiries regarding the “Veteran” EP including requests for promotional copies to review, requests to interview the artists or DJ requests for mp3s can be sent to us at UrbanElite PR. Our contact information is HERE

Once rivals in upstate NY’s rap battle scene, the pair joined forces in rhyming and tagging during the 90’s before Frost’s relocation to Canada. While remaining in touch, they pursued solo careers with Chop releasing a numerous mixtapes which included collaborations with Jinx Da Juvy, St Laz and Tom Gist

READ THE ARTICLE IN FULL HERE

The first single from the EP was “Leave It Alone”, a tribute to the late Sean Price which features Ruste Juxx and Nobi, available on iTunes.

A further bonus cut “Being A Boss” was released this week and made available as a free download direct from the Soundcloud stream. Check them out

Look out for more media coverage, videos and audio releases in the weeks ahead, and keep up to date with Tone Chop & Frost Gamble on social media :

All media, press and radio station DJ inquiries regarding Tone Chop & frost Gamble can be sent to us at UrbanElite PR. All our contact details are HERE 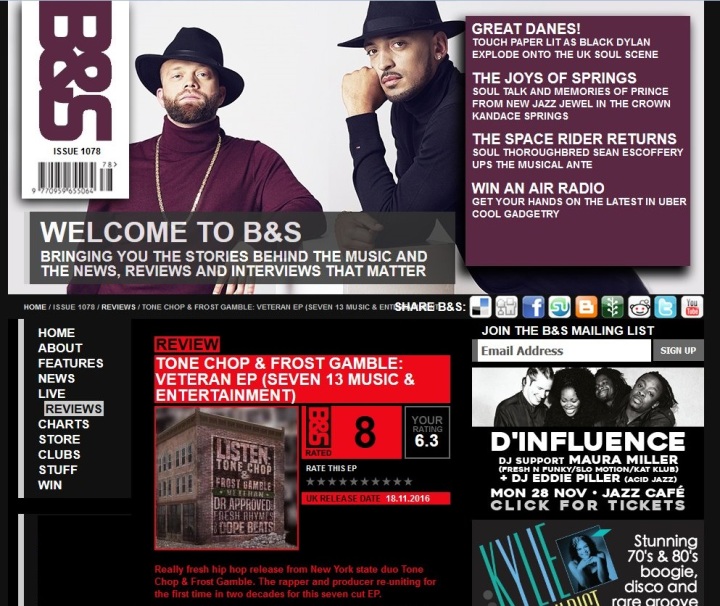 “Veteran” is appropriately named as the pair were originally rap battle rivals in the 90’s before developing a partnership in tagging and rhyming. Having subsequently moved to Canada, Frost continued to contribute to Chop’s various projects though both pursue solo careers that have seen them work with J-Ro, Tom Gist, Sadat-X, Tahmell and Jinx Da Juvy.

The new release represents their first official collaboration together and is a little early taster of what’s to come in 2017.

The first single taken from the 7 track EP was released recently, “Leave It Alone” being a tribute to the late Sean Price and featuring Ruste Juxx and Nobi. Available to buy on iTunes, check the stream

Look out for more bonus cuts, singles and videos coming in the weeks ahead together with new features and reviews appearing in international press. Meantime keep up to date with them on twitter @ToneChop & @FrostGamble and via their new joint Facebook Page

All international media, press and radio DJ inquiries regarding Tone Chop & Frost Gamble can be sent to us at UrbanElite PR, all our contact information is HERE

The collaboration is born of a rap battle rivalry dating back to the 90’s, but the pair have re-united with Frost now relocated to Canada and focused solely on beatmaking. Among his production credits there is work with Sadat-X, J-Ro, Rakim’s son Tahmell, and contributions to this year’s “God Bless Dope Rappers” compilation featuring Royce da 5’9″, Crooked I, Horsehose Gang and many more. 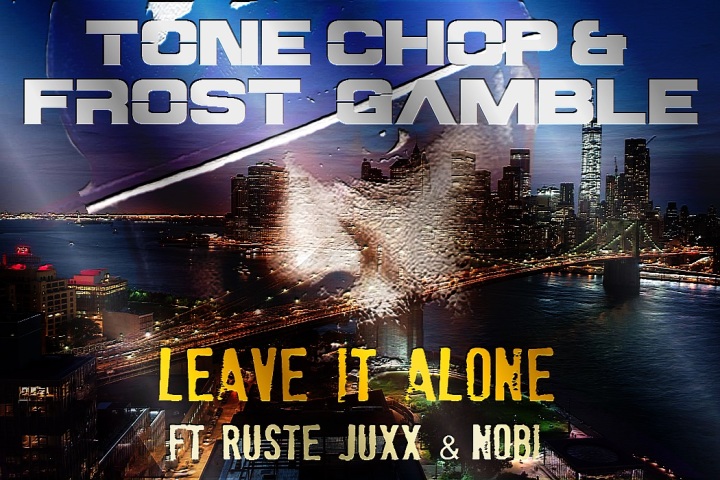 The first single released is “Leave It Alone”, a dedication to the late Sean Price and featuring Ruste Juxx and Nobi. It is now available to buy on iTUNES where the EP can also be pre-ordered

LISTEN TO THE AUDIO STREAM FOR “LEAVE IT ALONE” ON SOUNDCLOUD

You can read the full press release and story behind Tone Chop, Frost Gamble and the new Veteran EP HERE

Further audio and video releases coming in the weeks and months ahead. All international press, media & radio station DJ enquiries about the EP including requests to interview the duo & for an MP3 of “Leave It Alone” can be sent to us at UrbanElite PR, our contact details are HERE