Rapper and producer Az Izz, formerly of legendary New Jersey group The Outsidaz, returns with the self produced AA side single “Ghetto” b/w “Crazy” out today, the third from his new album “Dopeliss” releasing through New Dawn Records on July 3rd.

Together with Pacewon, Young Zee, Rah Digga and D.U., the Brick City crew were noted for their work with The Fugees, Wu Tang and a new emerging force from Detroit at the time, D12.  More recently pursuing a career in tv, film and sports music production, Az marks his arrival back with a first major solo offering in several years which blends the sounds of hip hop through the ages.

On “Ghetto”, the classic sound of the east coast prevails through guitar hooks and blaring brass on journeys to the gritty underbelly of the city, bars portraying street tales from the hood in the daily battle between survival and aspiration. Meanwhile on “Crazy”, aptly named for these times, heavy kicks and electronica fuel the adrenaline of a chaotic Brick City ride accompanied by fellow group member D.U.

Available to stream and download on APPLE / iTUNES, AMAZON & TIDAL Also streaming on Spotify and Soundcloud

All media, press and radio station DJ enquiries regarding Az Izz and New Dawn Records can be sent to us at UrbanElite PR, our contact information is available HERE

It’s a welcome return to the hip hop fold for rapper and producer Az Izz from the legendary New Jersey group The Outsidaz, known for their early work with Wu Tang, The Fugees and D12 and who counted Pace Won and Rah Digga among their numbers.  His new album “Dopeliss” is out July 3rd through New Dawn Records, and the first single taken from it released today.

The self produced “Gettin’ It” features East Orange luminary Drift, and over the funked up percussive beat the pair trade claims for what’s theirs   while also bringing a little extra traditional rap beef to the table, in this case a historic tussle with Royce da 5’9″.  The accompanying video was also released today, shot in the back yards of Brick City.

Digitally distributed by Ingrooves / Universal and available from Apple, Amazon, Tidal and Spotify

All media, press and DJ inquiries regarding all of New Dawn Records’ releases can be directed to ourselves UrbanElite PR, the in house promotional division of the label. Our contact details are available HERE

The Newark emcees Riq da Kid, Prince AK and Tru Trilla called on long time associate Clinton Place to produce the entire album which also features many of the Garden State’s finest lyricists including Treach (Naughty by Nature), Lakim Shabazz, Tha Advocate, DoItAll (Lords of the Underground), Famiil, Ib the Druid and many more. There is also a little UK flavour courtesy of WiseRap

With neck breakin beats, raucous delivery and on point lyricism, this energetic release is a banger from start to finish which combines the best elements of the Golden Era with a contemporary twist for 2015.

All media and press enquiries about 050 Boyz can be sent to us at UrbanElite PR, our contact details are HERE 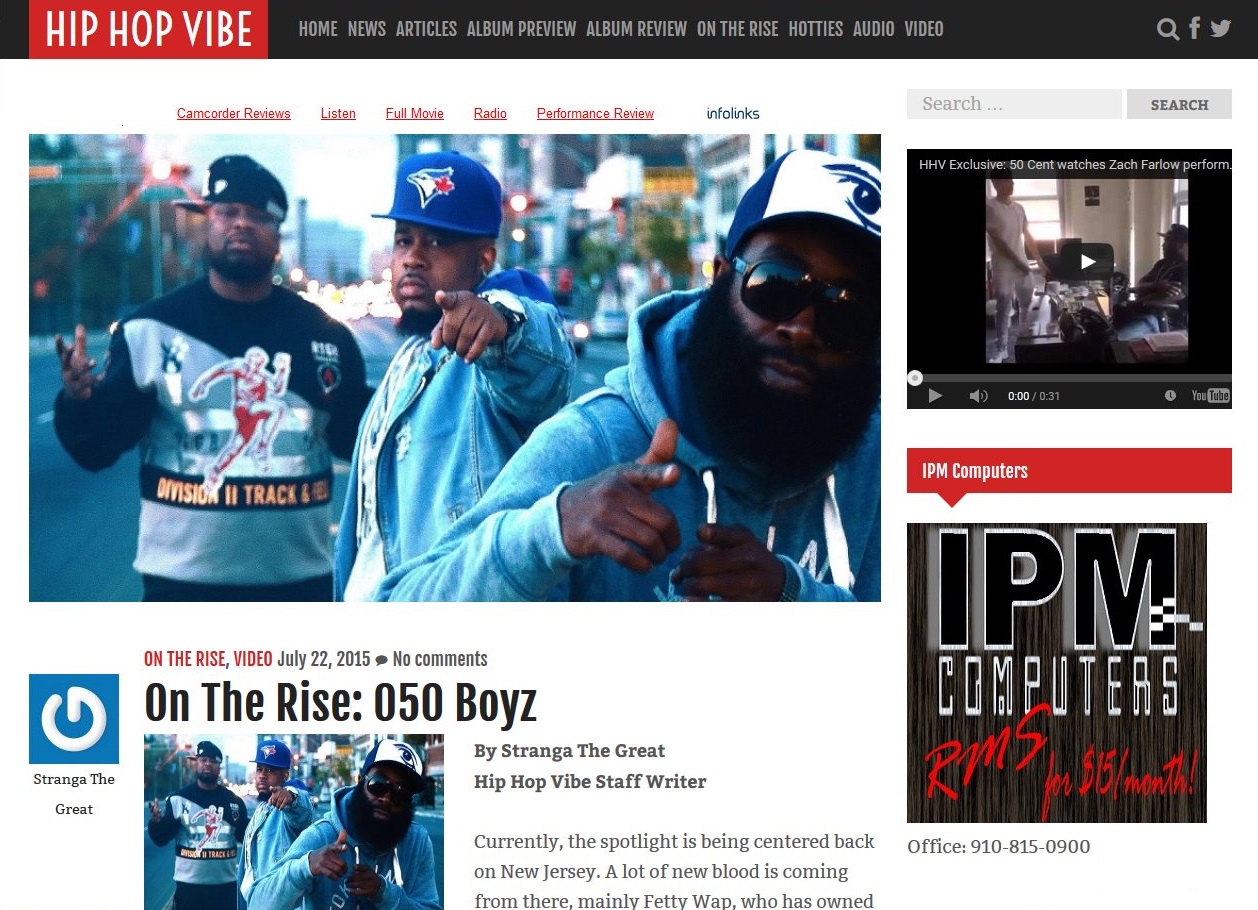 With just over a week to go until the release of their official debut album “Everything 050” on 4th August, Newark trio Riq da Kid, Tru Trilla and Prince AK – aka 050 Boyz – sat down with Hip Hop Vibe Staff Writer Stranga the Great to chop it up about their history, the album and the New Jersey scene

In this new “On The Rise” feature, the group who all first picked up the mic during the Golden Era discuss the history of hip hop in the Garden State and their own connection to Queen Latifah’s Flavor Unit, the sound that defines them and their own influences coming up, their immediate plans with the album and finish by addressing recent high profile racial issues affecting the USA including the removal of the confederate flag, attacks on black churches and police brutality

READ EVERYTHING THEY HAD TO SAY HERE

Yesterday they launched a new joint “Watch That (Bricks Mix)”, a remix from their back catalogue which is already getting a lot of air time. Check out the stream on Soundcloud

Expect to see a lot more international media coverage in the weeks ahead together with more audio and video releases. The group will also be DJ Eclipse’s guests twice next month. First on Wednesday 12th August on The Halftime Show on WNYU and then later in the month on Sunday 30th August for his Rap Is Outta Control Show on Sirius XM.

You will also be able to catch 050 Boyz perfoming live at Newark’s Lincoln Park Festival this Sunday, 26th July. Their live shows are always big on energy and definitely worth seeing if you’re in the area. Expect a fuel injected version of what’s represented in their “Hot Damn” video!

The album is true to its name, 0-50 being the area code for New Jersey, with many features from local artists including Treach, DoItAll, Ib the Druid, Famiil, Lakim Shabazz, B Wells & Tha Advocate. Production is by Clinton Place (DJ Jamal#9), Prince AK’s long time associate from the days where the pair performed live with Supreme C.

All international press, media and DJ enquiries regarding 050 Boyz can be sent to us at UrbanElite PR, contact details HERE

In the world of hip hop, few female rappers have stood the test of time more than New Jersey’s Rah Digga.

Best known for her involvement with Flipmode Squad, she’s operated as a solo artist for a number of years and last released an official studio album “Classic” in 2010.

Though it may appear to some that she’s been living “under the radar” for a time, London journalist Jazz Gill discovered that in fact she remains one of the busiest artists on the scene today.

With a string of internet releases over the past year, British magazine Guestlist decided to find out what’s been happening, and the reporter discovered that the legendary rapper has a full schedule ahead.

She speaks on her new New Jersey Dance Network project and the level of importance that has been given in the past few months, and the amount of personal time she has devoted to it. NJDN is a non profit organization aimed to help the young people in Newark have a safe place to be creative and channel their energy in a positive way. But there is also a further aim with it as she explains her plans for staging a new musical “Breakin in the Brix” and the launch of her new EP “Hood House”, all of which is linked.

The magazine also finds out her thoughts on the recent twerking craze and contemporary artists which she spoke on via the release of her new joint “New Hoes” earlier in the year, a track featured in the UK’s DJ Magazine recently. They also take it back and discuss her decision to leave Flipmode and her solo career from then until now, as well as her future release plans which include a new mixtape and album in 2014.

Very interesting insight which can be read HERE

For more information about the New Jersey Dance Network, you can read about it HERE

For all Rah Digga merchandise & to buy her music visit http://rahdiggamusic.bandcamp.com and you can keep up to date with her on twitter @TheRealRahDigga You can also connect with the magazine @Guestlistdotnet and Jazz over at @JazzTheJourno

With his new album “God Save the King (Proper English Version)” having dropped in August, Ohio’s Copywrite took time out recently to speak with Ayara Pommells for Stupid Dope

They discuss the concept behind the album and the differences between the “Proper English Version” and the version released to the US market, the differences and similarities in the US and UK hip hop scenes, and his new Mhz album “Megacy” – also recently covered in this month’s Clash Magazine “Rapture & Verse” column.

The new Mhz album “Megacy” will be dropping over the next few months and should coincide with a planned tour of Europe & The UK in early 2013.

Keep up to date with Copywrite at www.copywritesworld.com and you can connect with them all on twitter @Copywrite @iAmaButtafly & @stupidDOPE