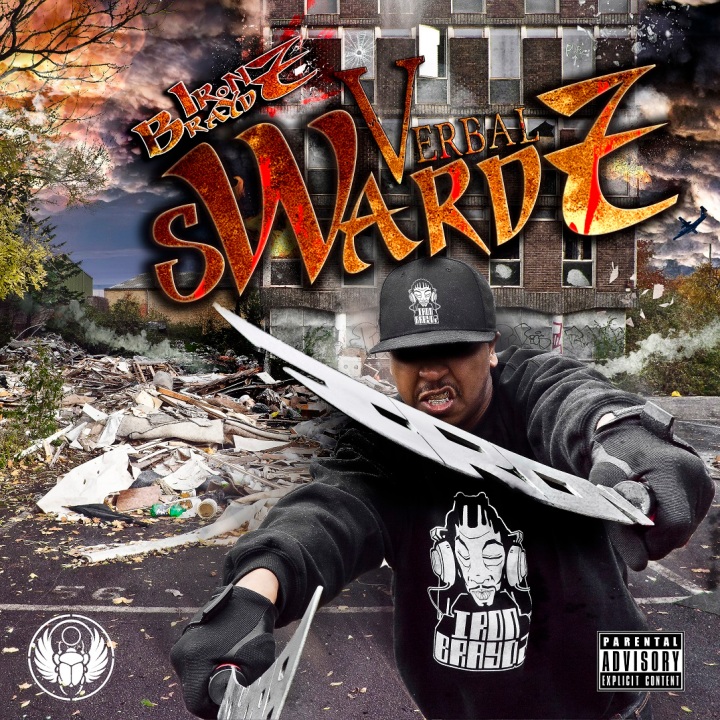 The Triple Darkness member has several releases lined up for the year ahead, starting with this 10 track hip hop banger which has a real international flavour given the various featured artists involved. Check the tracklist

You can now all get hold of it at his BANDCAMP

He marked the release by launching a brand new video today for the track “Rambo” featuring Kyza and Skriblah. Shot recently in east London by Global Faction, check it out on Youtube

Look out for a lot more international media coverage on this release, and meantime connect with Iron Braydz on twitter @Braydz and on Facebook “HollaAtBraydz“. You can also reach the guys Kyza on twitter @MrSaySo and @Skriblah

All dj requests for the full quality clean radio edit mp3 of Rambo, or any further media & press inquiries about Iron Braydz & the “Verbal sWARdz” EP can be sent to UrbanElite PR HERE

British online music publication God is in the TV took time out recently to meet up with hip hop Emcee & producer Iron Braydz in London’s China Town ahead of the release of his new EP “Verbal sWARdz” which releases to the public on 14th April on his Unorthostract label.

Their writer Taytula Burke spoke with the rapper about the new release and his earliest days including his meeting with Wu Tang’s RZA, and reflects on the current UK and global hip hop scene

Iron Braydz launched the official audio stream of the entire EP to the internet today. Largely self produced, it represents his involvement within his own and Stateside marketplace over the years with some top features on board. Here’s the tracklist :

Check out the stream on Soundcloud

The EP will be available to the public from http://braydz.bandcamp.com Keep up to date with him on twitter @Braydz and check in with the publication at @GodIsInTheTV and Taytula at @Taykeova 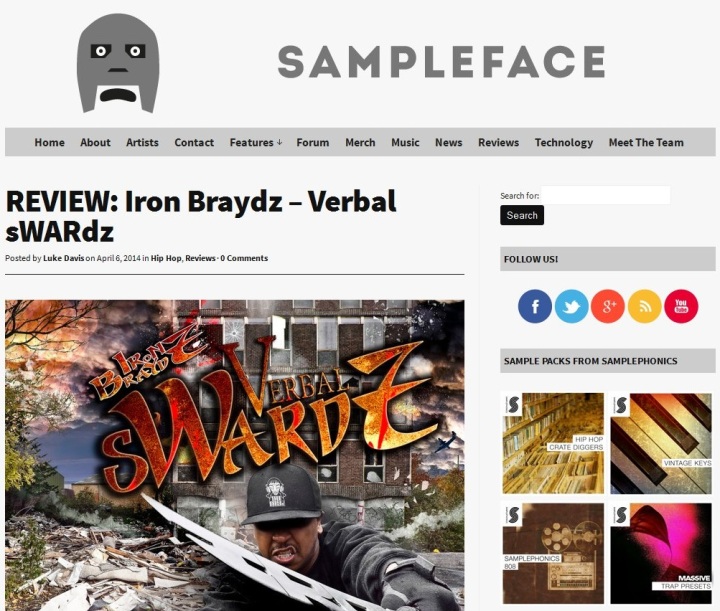 The first in a series of releases for the Triple Darkness & FuFu Gang member this year, it’s a very strong marker for what lies ahead for the rapper who also has an acting role in a new film “Night Bus” shot by award winning director Simon Baker due out later in 2014.

There has been extensive international media interest in the release, the latest of which comes via a review by British online publication Sampleface

Contributor Taytula Burke opens the article “His past two offerings Devil May Cry and Holla @ Braydz saw the NW10 rapper prove that being a student of the game can pay off — particularly when wordplay and lyricism become synonymous with your name. So is it reasonable to expect that tracks that even he previously slept on would be worth the time of day? Abso-frickin’-lutely.”

The EP is largely self produced and includes features by Prince Po, Sean Price, Phat Kat, Kyza, Skriblah and several of his fellow Triple Darkness members. He will be launching the official audio stream of the entire EP tomorrow, Tuesday 8th April, at midday (GMT) premiered by Shout 4 Music as part of their feature on him, so look out for that at www.shout4music.com

The EP releases to the public on 14th April, and to celebrate he will also be launching a new video for Rambo on that day, shot in London last week by Global Faction.

All media & press inquiries about this release, whether requests for promotional copies of “Verbal sWARdz” for review or requests to interview Iron Braydz can be sent to UrbanElite PR HERE

They have begun a new series “25 Things”, an interesting insight into facts about a new release and artist previously unknown. Latest to feature is north London’s Iron Braydz who releases his new EP “Verbal sWARdz” on 14th April

In this article he explains how he decided on the name for the EP, how he recorded the beats, why a comment by English Frank influenced a verse in the track Crowbar Head Topper, the way in which his feelings on the build up of racial tensions in London formed much of the subject matter and the reasons why the EP almost never saw the light of day.

All of that & much more can be read HERE

There has been a huge level of media interest in this release in recent weeks, publications in the United States, Canada, UK & Europe will all be covering in the weeks ahead. It’s a quality mix of hip hop production in the main supplied by Iron Braydz and superior lyricism from the man himself augmented by the features from Sean Price, Prince Po, Triple Darkness, Kyza, Skriblah and Phat Kat….with a special guest appearance by Kiss FM’s DJ Shortee Blitz

All members of the press & media who would like a copy of the EP for review, or who would like to request an interview with Iron Braydz can contact UrbanElite PR HERE

Snapshot passages from the review :

“Back to dominantly instil fear into weak MC’s and shed a wealth of knowledgeable insights, Iron Braydz marks his return on April 14th with his Verbal sWARdz EP…..throughout the EP, Braydz induces terror over dark, bassy instrumentals, spitting without compassion or empathy through a multitude of immodest verses….compiled full of lyrical devastation, with too many unnerving & aggro verses to count. Full of quick-fire rhymes, intricate verbal frenzies and perspectives worth pondering, we shall be watching Iron Braydz future movements ready for when he decides to unleash the beast that patiently resides within him”

Read all about it HERE

Iron Braydz is currently putting together a new video release to hopefully coincide with the EP’s release on 14th April, but meantime check the Triple Darkness & FuFu Gang member’s most recent release “Dredd”

North London’s Iron Braydz is one of the UK’s most highly rated hip hop lyricists, and is set to launch a series of solo releases over the next 12 months, beginning with the new Verbal sWARdz EP on 14th April.

The Triple Darkness & FuFu Gang member sat down with the online publication “British Hip Hop” recently to discuss his early days, the development from his debut album Devil May Cry, the writing and production process of Verbal sWARdz and its underlying themes, and his future plans

The EP, largely self produced and featuring Prince Po, Sean Price, Triple Darkness, Kyza & Skriblah, has been generating a lot of interest in the international media in the past few weeks, and expect to see much more coverage coming in the next few weeks.

All media inquiries regarding this release, whether requests for promotional copies of the Verbal sWARdz EP for review, or requests to interview Iron Braydz can be sent to UrbanElite PR HERE 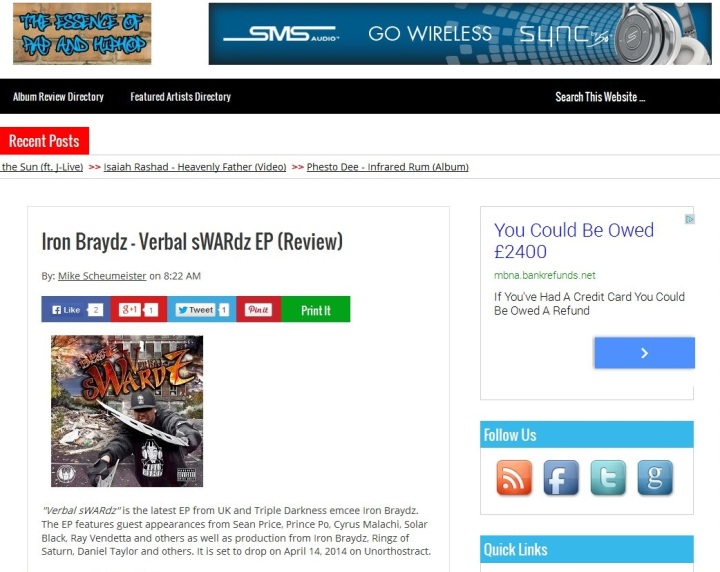 The most recent member of London’s Triple Darkness has produced most of the EP, and called in Prince Po, Sean Price, Triple Darkness, Kyza and Skriblah to give some additional lyrical fire on features duty, complimenting Braydz own highly rated verbal skills

He does also go solo, which you can see in his latest video “Dredd”

Also due to appear in a new independent film “Night Bus” shot by award winning director Simon Baker later in the year, look out for more reviews and interviews coming in the weeks ahead

All further media inquiries regarding Iron Braydz, requests for interviews, or promotional copies of the Verbal sWARdz EP for review, can be sent to UrbanElite PR HERE

Wordplay Magazine is an online and physical publication dedicated to the various elements of hip hop culture covering Graffiti, Breakin, Fashion and reporting on the hottest releases from the UK and overseas.

They are the latest to run the rule over the new EP Verbal sWARdz by north London Emcee and producer Iron Braydz.

The article begins “If you’ve not been paying attention up until this point, now’s the time to start. ‘Verbal sWARdz’ is the first in a slew of releases coming out over the coming year, and if this is Braydz’ time to make a statement, he’s off to a strong start.” and you can read the rest of their findings HERE

The newest member of Triple Darkness is living up to his reputation as one of the finest lyricists to emerge from the UK in recent years, and the EP, which releases on 14th April, is the beginning of what will be a busy year ahead whether releasing solo material, or as a part of two separate groups, or even when appearing in a soon to be released independent film “Night Bus” directed by the award winning Simon Baker.

Keep up to date with him on twitter @Braydz and the magazine over at @Wordplaymag The EP will be available from http://braydz.bandcamp.com

You will be reading a lot more about this release in the weeks ahead, and look out for a brand new video coming in early April. Any media and press requiring promotional copies of the EP to review, or to request an interview with Iron Braydz should address their enquiries to UrbanElite PR HERE

Germany’s Backspin Magazine compile a weekly column of hip hop & rap releases from around the world in their “Plattenkiste” series, snapshot reviews highlighting what they rate

They have just picked up on the new EP “Verbal sWARdz” by London rapper & producer Iron Braydz which releases on 14th April. The approximate translation reads as follows :

“Iron Braydz makes “Verbal sWARdz” dark and completely convincing all along the line. Simple beats and an aggressive flow is the secret recipe of “Verbal sWARdz”. That Iron Braydz has been influenced by Wu-Tang Clan, Immortal Technique, and Public Enemy you can sense throughout While the record may be missing a dash of variety, Iron Braydz and “Verbal sWARdz” is exactly the right thing to roll the car’s windows down and arrive in the City like a boss.”

You can read the whole column HERE

Long considered one of the most skilled lyricists in the UK, the newest member of Triple Darkness has picked up a lot of international media interest in this release, the results of which will be seen in the weeks ahead. The EP is the first of a series of releases planned in the year ahead, and taken from it is the joint “Millennium” which features Organized Konfusion’s Prince Po

All press & media enquiries regarding the release, requests for promotional copies of the EP for review, or requests to interview Iron Braydz, should be sent to UrbanElite PR HERE 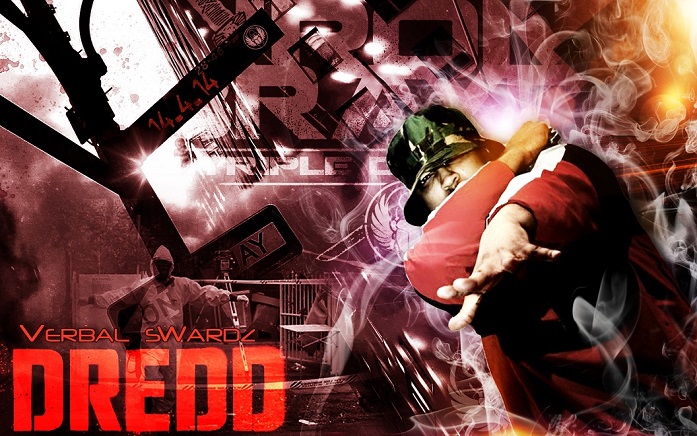 Iron Braydz releases his Verbal sWARdz EP on 14th April, and has just launched this new video for the self produced track “Dredd”

The EP, the first of a series of releases planned by the North London MC over the next year, includes features by several of his fellow Triple Darkness members in addition to Kyza, Skriblah, Organized Konfusion’s Prince Po and Sean Price

Also look out for Braydz appearing in a new independent film “Night Bus” later in the year, directed by Simon Baker who picked up several awards for his “Paralympic” series for Channel 4.

The EP will be available from http://braydz.bandcamp.com

You can also connect online with Iron Braydz via twitter @Braydz

Amy djs not already serviced with the full quality clean / radio edit mp3 can request it from UrbanElite PR HERE Similarly, any press & media interested in receiving a promotional copy of the EP for review, or to request an interview with Iron Braydz should get in touch with UrbanElite PR at the same point of contact.